Michelle Payne hopes her landmark victory aboard 100-1 outsider Prince Of Penzance in the Emirates Melbourne Cup will open more doors for female jockeys in the future.

Payne became the first lady rider to win the two-mile Group One at Flemington as the Darren Weir-trained Prince Of Penzance held off Willie Mullins' Irish raider Max Dynamite (12-1) by half a length.

Criterion (18-1), who contested both the Prince Of Wales's Stakes at Royal Ascot and the Juddmonte International at York this summer, took third place, with Ed Dunlop's Trip To Paris (5-1) fourth.

Payne, who has partnered Prince Of Penzance throughout his career, was eager to thank leading handler Weir for his support in what she considers a "chauvinistic sport".

"To think that Darren Weir has given me a go, and it's such a chauvinistic sport," she told Channel Seven.

"I know some of the owners were keen to kick me off, and John Richards and Darren stuck strongly with me, and I put in all the effort I could and galloped him all I could because I thought he had what it takes to win the Melbourne Cup - and I can't say how grateful I am to them.

"I want to say to everyone else, 'get stuffed', because women can do anything and we can beat the world.

"I think one or two of the owners wanted to take me off but hopefully they're pretty happy with me now.

"I know it's a male-dominated sport and people don't think we're strong enough. It's about so much more than that, you've got to get a horse in a rhythm, be patient.

"I'm so pleased to win and hopefully it will mean people give more female jockeys a go."

The Payne family are well known in Australia as Michelle is one of eight siblings to pursue a career in the saddle, with her brother Patrick also now a trainer. 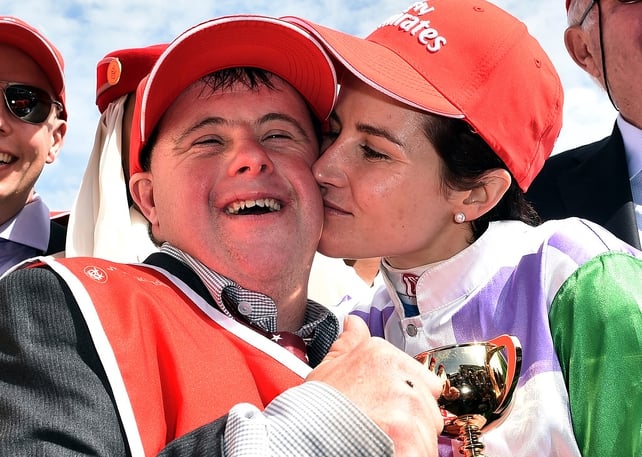 Another of Payne's brothers Stevie, who has Down's Syndrome, works for Weir and led up Prince Of Penzance for his big-race victory, making it a truly memorable family occasion.

Payne brought her mount with a perfectly-timed run down the middle of the track as Frankie Dettori struggled to find racing room on Max Dynamite and got going all too late.

Weir added: "This is a lifetime dream come true. I'll enjoy it with these blokes (the owners and staff) for sure. I can't thank them enough and this is the most unbelievable thing to happen to anyone.

"It all started with this dream to win a Melbourne Cup and Sandy McGregor, a mate of mine, offered to put the money up, and the rest is history.

"He'd had two joint surgeries, then when he was about to come back into work he got a twisted bowel and a colic operation - what an amazing horse."

After the disappointment of just missing out on a victory that would have capped a stellar year, there was also a further sting in the tail for Dettori, who was banned for one month and fined $20,000 for careless riding.

He told www.racing.com: "It was a bit unfortunate that I couldn't get the split when I wanted, but that's racing."

Ed Dunlop saw his second string Red Cadeaux pulled up in his fifth attempt at the Australian prize and he will now be retired.

A Racing Victoria statement read: "RV can confirm that diagnostics undertaken on Red Cadeaux at the University of Melbourne Equine Centre at Werribee this afternoon show the horse has sustained a fracture to his medial sesamoid in his left fore fetlock.

"The horse is comfortable with his leg in a splint and the fracture is stable. 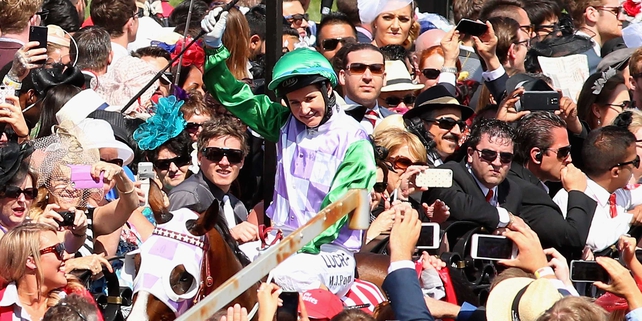 Quest For More was ninth for Roger Charlton after racing prominently, while Snow Sky was squeezed for room in the closing stages as Ryan Moore had to snatch up his mount, eventually finishing last of the 23 finishers, with Saeed bin Suroor's Sky Hunter a place in front of him.

Tommy Berry, rider of Trip To Paris, felt the race was not really run to suit his mount.

He said: "The slow tempo mid-race didn't suit him. He would've liked it a bit more mid-race but I thought I was the winner at the top of the straight, but he didn't show the same turn-of-foot as he did in the Caulfield Cup.

"The winner had me cold straight away and that probably dented his confidence."

Spencer was satisfied with his mount's effort, although he thought the ground was against his horse.

He said: "A good run around. The draw made it difficult and I felt the track was a little bit 'dead' for my horse."

Damien Lane rode Quest For More and he said: "Super run. A bit more room in the straight and he finishes closer."

He said: "(He is a) lovely horse. His style of racing left him flat-footed in the finish and it was just all too much for him too quickly."

He said: "I tried to get a smooth trip. He was three-wide the whole way around but he was in a nice rhythm.

"The pace was stop-and-start and I was in a spot that I could do something about it. Bottom line is that he probably doesn't get the trip."

Moore admitted he was unlikely to have won on Snow Sky, adding: "I was running a nice race. I wasn't going to win but I just got chopped off." 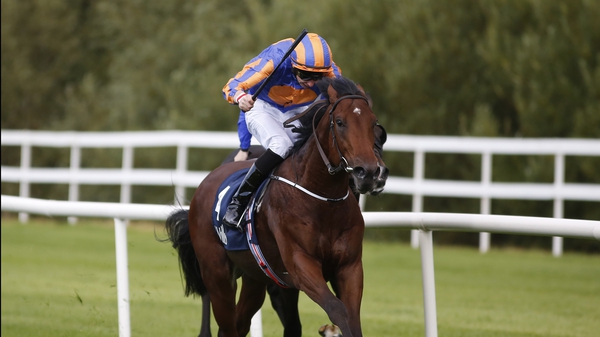