Golden Horn headlines a strong team from Europe given pre-entries at the Breeders' Cup in Keeneland next week.

The John Gosden-trained colt has won the Derby, Eclipse, Irish Champion Stakes and Prix de l'Arc de Triomphe this season and will bid to end his racing career with victory in the Breeders' Cup Turf.

Gosden said: "Golden Horn worked this morning and we were happy with how he worked. He worked on the long gallop and Frankie Dettori was pleased with him.

"The plan is for him to head out on Saturday, all being well. He has held his condition extremely well. He put the weight back on to what he was before the Arc five days after the race.

"He has some constitution and that is the one thing that gives us hope racing this late in the year with him."

Charlton said: "Time Test is in a good place at the moment - I am very happy with him. He had a gallop at Wolverhampton last week, jumping out of the gates and spinning round the tight turns under Ryan Moore, which was highly satisfactory.

"I am very excited to have another Breeders' Cup runner with a lively chance, and if he gets a good draw I think that he is capable of running very well. He may still prove to be at his best over a mile and a quarter, but he has enough class and speed to be effective over a mile and I think that the turns at Keeneland will suit him."

Current champion Karakontie is back to defend his crown for soon-to-retire trainer Jonathan Pease and the Niarchos family.

Also in the field are the Andre Fabre-trained duo of Esoterique and Make Believe.

Dual 2000 Guineas winner Gleneagles has been entered in the Breeders' Cup Classic on dirt, and is one of nine possible runners at the meeting from Ireland, with his Aidan O'Brien-trained stablemate Found in the Turf, second to Golden Horn at Leopardstown and also runner-up in the Champion Stakes at Ascot.

O'Brien has War Envoy in the mile races on turf and dirt, with Waterloo Bridge, Shogun, Hit It A Bomb and Alice Springs in contention for the two-year-old contests.

David Wachman could run star filly Legatissimo, who is almost certain to start favourite for the Filly and Mare Turf. 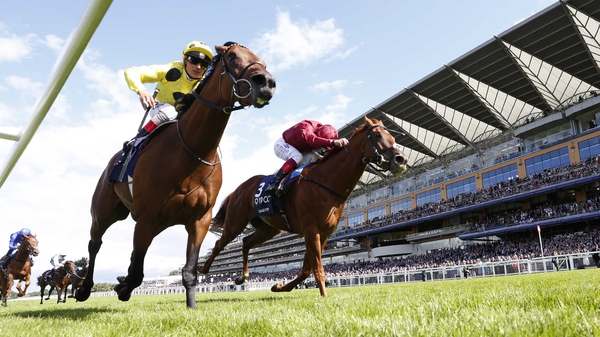