John Gosden's Derby hero and subsequent winner of the Coral-Eclipse and Irish Champion Stakes had a wide draw to overcome, but Dettori gradually angled his way across the track and into an ideal position, tracking the pacemaking Shahah.

Golden Horn came under pressure early in the straight and the packed grandstand erupted as Criquette Head-Maarek's wonder mare Treve, bidding to become the first horse in history to win the Arc three times, arrived on the outside seemingly full of running.

However, her trademark late burst failed to materialise once push came to shove and Golden Horn galloped all the way to the line, passing the post clear under a jubilant Dettori. Flintshire filled the runner-up spot for the second successive year, with Treve edged out for third by New Bay.

Dermot Weld's Free Eagle was the best of the Irish in sixth place, with Pat Smullen in the saddle.

Gosden, claiming his first Arc victory, said: "It's great to win the Arc in France and the Derby in England - that's what it's about.

"When you're drawn wide, if you stay wide for a long time, you can run your own little race and not be bothered by anyone and then slot across.

"It was perfect as we sat behind the pacemaker and then kicked because as Frankie says, if you don't kick at a certain time here they come like arrows at your back.

"I think (Dettori and Golden Horn) help each other. I keep saying he's a better horse coming from off the pace and he was today."

Golden Horn will head for stallion duties next season - but could have one more run this season.
Gosden added: "He retires to stud and the owner is quite keen on the Breeders' Cup. It gives us one day short of a month, he's got a great constitution and he travels well.

"If he's in good order next week, there's no reason why he can't go there."

Dettori said: "I really believed in the horse. He put a great Arc to bed like a superstar.
"I was going that fast in the last 300 (metres) I thought it was impossible for another horse to pass me. It was an amazing performance.

"I've been scratching my head all week. Everyone was determined to make me sit behind and I said 'Why? We've got the best horse. Let me get him up there and show the world how good he is'. The only blip he had was at York, but his record is unbelievable. He's probably the best horse I've ridden."

Owner Anthony Oppenheimer said: "It's very exciting. "He was magnificently ridden and has just a wonderful trainer in John Gosden. "He's such an understanding horseman and I can rest easily knowing he's in complete control.

"As for the future, we'll let the horse tell us whether we run again. "There are the two races (Champion Stakes at Ascot and Breeders' Cup) to think about. "This might have taken a bit out of him, though, so we'll see.

"He will definitely not race on next season. He is due to stand at Darley and I will retain a half-share.
"I'm very proud - he's a wonderful, wonderful horse."

After the race, Criquette Head-Maarek announced that Treve would be retired to stud and added: "There is no disgrace in being beaten by Golden Horn. He was the Derby winner and there are no excuses. Before the race I was scared of Golden Horn, New Bay and Flintshire and they have filled the frame. In racing there are some you win and some in which you get beat, that's the game we are in.

"She didn't stride with the fluency she displayed in the Vermeille and maybe she had a harder race in the trial than I thought. "We have to take it on the chin and move on, but to try to blame it on the ground is wrong because it is not that hard. Maybe sometimes with fillies they have a day off - maybe she had a day off."

Harry Herbert, racing manager to Treve's owner Sheikh Joaan, confirmed Treve has run her last race.
He said: "She's run a great race. Thierry Jarnet is so disappointed as I think she was a bit free early. He just pointed at the ground. He was gutted - he could hardly speak.

"He just said it was too quick for her, but personally I think she was just a little bit keen and a little bit fresh and was never quite in the right spot. She had every chance. The winner is awesome. Golden Horn is a worthy champion." 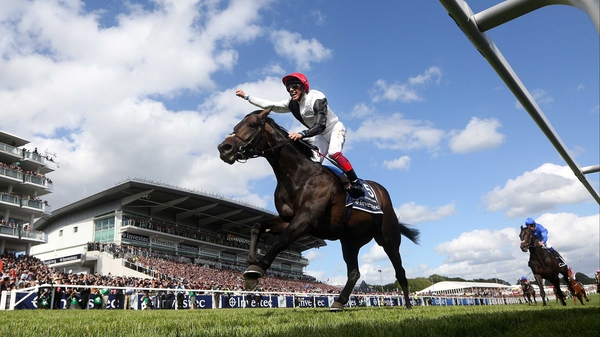