Supporters of Golden Horn and Gleneagles face an anxious wait to see whether the Classic heroes will lock horns in Saturday's Qipco Irish Champion Stakes at Leopardstown.

John Gosden's Derby and Eclipse winner Golden Horn is set to line up alongside Aidan O'Brien's dual 2000 Guineas scorer Gleneagles in what is being billed as the race of the season at the Dublin circuit this weekend, but an unpredictable weather forecast has left both camps in limbo.

Ground conditions on Friday morning remained on the quick side of good, but rain is seemingly on the way and both Gosden and O'Brien are likely to leave it late before committing their star colts to the Group One feature.

"If it's good or good to soft ground we'll run." - John Gosden

Having already missed the King George VI And Queen Elizabeth Stakes at Ascot this summer on account of unsuitable ground, Gosden is keen to let Golden Horn line up, but will make a final decision after walking the track himself before racing.

He said: "It wasn't our fault that we had an infinite amount of rain the 24 hours before the King George and I was right not to run him there over that trip.

"We go to Ireland and I'd very much like to run. If it's good or good to soft ground we'll run. If it goes very, very soft, I'll walk that track about three times until my wellies fill up and then make a decision.

"I'll go over late morning and walk the track."

Golden Horn will be on something of a recovery mission if given the green light having seen his unbeaten record go up in smoke when suffering a shock defeat at the hands of Arabian Queen in last month's Juddmonte International at York.

While keen to give credit to the winner, Gosden feels the team got the tactics wrong on the Knavesmire.

"We got it wrong at York, but full marks to the filly," said the Clarehaven handler.

"The filly was tremendous. She made every use of the 5lb allowance and put her head back in front.

"As far as I'm concerned, that's what racing is all about. If you run them enough something is going to happen.

"If you think of the two great stallions in Europe now - Dubawi and Galileo - they both tasted defeat. Secretariat tasted defeat, as did Nijinsky, so there's quite a long line.

"He's an exuberant horse and that's part of his character." 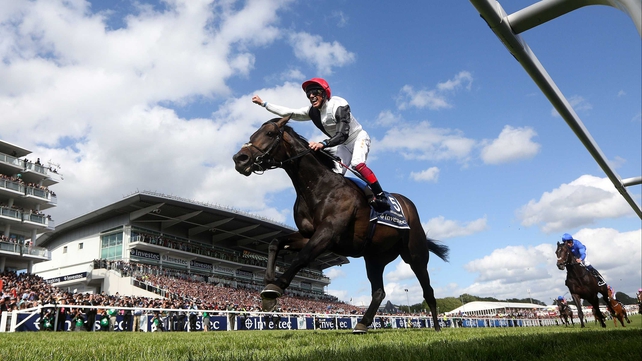 "He's been on the go since mid-January. For these three-year-olds that go all the way through the year and don't have a summer break, which he hasn't, the year can stretch them out a little bit, but he seems bright and happier than ever.

"You don't go winning Dantes and Derbys and Eclipses for nothing - he's a fabulous horse and a charming horse to be around.

"He's a character and a lad, but he gets on with the job and he's a pleasure to train."

The decision of Leopardstown officials to run the Irish Champion Stakes an hour earlier than originally scheduled in an attempt to ensure the main event is run on the best possible ground was not good news for everyone, with Frankie Dettori forced to miss a plum ride in the St Leger at Doncaster aboard O'Brien's Bondi Beach.

The popular Italian will now head straight for Leopardstown and is keeping his fingers crossed conditions do not deteriorate dramatically.

He said: "Unfortunately they moved the race forward and I couldn't do both (Leger and Irish Champion), but it looks a great race.

"I think good to soft is OK, we wouldn't want it too soft.

"He's in good form, it's a good race and I'm looking forward to it."

Gleneagles is the undoubted star of the Classic generation at a mile this season, having added the St James's Palace Stakes at Royal Ascot to his back-to-back Guineas triumphs.

It has been a frustrating summer for the Ballydoyle inmate having missed engagements at Goodwood, in France and at York and connections are praying he finally gets his ground on Saturday evening.

The trainer's son Joseph takes the ride as the Galileo colt prepares to test his powers over a mile and a quarter for the first time.

He said: "I'd be very hopeful, without being confident. He relaxes well, he travels, he's got speed.

"I never thought he'd end up going a mile and a quarter this year, but that's just the way things have worked out - our hand has been forced a little bit - but I'd be hopeful that he'd get it without saying he definitely would."