Zawraq is reported to have made "substantial improvement" in his race against time to be fit for the Investec Derby at Epsom on Saturday.

Dermot Weld's unbeaten colt is among the leading fancies for the premier Classic, but after completing a satisfactory piece of work on Tuesday morning, he was found to have been slightly lame upon his return to the yard.

Initial X-rays and scans suggested the injury was not serious and his leg has been iced during the last 24 hours.

Zawraq engaged in light exercise on Wednesday morning, although any decision on his Derby participation is unlikely to made until Thursday at the earliest.

Angus Gold, racing manager for owner Sheikh Hamdan Al Maktoum, told Press Association Sport: "I have just spoken to Mr Weld and, in his words, the horse is 80% better than he was this time yesterday.

"They've taken him out this morning and he's walking sound.

"Leigh Roche, who has done most of the work on him, trotted him and he thought he felt 100%.

"The vet was there and he said he could see he was still feeling it little bit, but there has certainly been substantial improvement and it's a step in the right direction.

"They will now continue with the icing and he will be X-rayed again and rescanned this afternoon, just to check nothing more sinister has come to light.

"As long as they are clear and as long as he's sound, he'll have a good canter tomorrow morning with Pat Smullen aboard and how he comes out of that will obviously be crucial.

"I think he'll probably canter around 8am, then they'll have to leave him an hour to cool down and then they'll see how he is.

"Being positive, if he canters and everything is fine, I would imagine he'll be declared."

William Buick remains hopeful Jack Hobbs can at least close the gap on Golden Horn in the Derby, having been put in his place by his stable companion in the Dante at York last month.

Buick was aboard Golden Horn on the Knavesmire, with Frankie Dettori riding Jack Hobbs, but the two leading jockeys switch places this weekend with Jack Hobbs having subsequently been snapped up by Buick's retaining owners Godolphin.

"I was very happy with Jack Hobbs at Epsom the other day at Breakfast With The Stars. He's a lovely horse, a lovely individual and I thought he handled the track pretty well," the jockey told At The Races.

"You've got to remember it's come very thick and fast for him (Jack Hobbs). He won his maiden in the winter at Wolverhampton, went to Sandown and then to the Dante, so it's all happened very quick.

"He could just be a horse (with whom) the penny is just dropping."
Andrew Balding's Dante third Elm Park is also set to renew rivalry with the John Gosden-trained duo.

The son of Phoenix Reach notably changed his legs on a number of occasions when working at Epsom last week, but Balding is not overly concerned.

He said: "I couldn't be happier with his well being. He changed his legs a lot in the gallop, there's no question, but it didn't seem to affect his momentum.

"If you look at his races, certainly in the Royal Lodge, he must have changed his legs 16 times and still found another gear at the end of it.

"What will be will be. If he doesn't handle the track he won't win the Derby, it's as simple as that.

"He's in fine form. His work has been really good, he's in good physical condition and we're really looking forward to it." 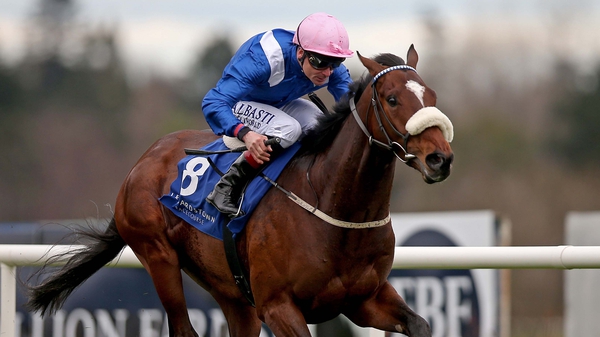 Zawraq in late injury scare ahead of Derby