Richard Hannon is under no illusions about the task facing Ivawood ahead of his rematch with Gleneagles in the Tattersalls Irish 2,000 Guineas.

A winner of three of his four juvenile starts before being touched off in the Middle Park Stakes, Ivawood was a disappointing favourite on his reappearance in the Greenham at Newbury, but raised his game significantly to finish a three-length third behind Gleneagles in the 2000 Guineas at Newmarket three weeks ago.

The pair renew rivalries at the Curragh on Saturday and Gleneagles is unsurprisingly a hot favourite to confirm his superiority, but Hannon could not be happier with his charge.

He said: "The odds are stacked against us, but we think Ivawood has improved again since the Guineas and though we are not claiming we will beat Gleneagles, who looked a proper horse at Newmarket, we have always loved our fellow and he'll be giving his all to gain revenge.

"He'll be going there at the top of his game."

The son of Paco Boy won the Spring Cup at Lingfield in March but has been beaten on each of his two starts since on the all-weather.

"Lexington Times has it all to do on ratings but has definitely improved for a little break, Hannon told his official website.

The Hannon pair are joined on the trip across the Irish Sea by the Roger Varian-trained Belardo.

Last season's Dewhurst hero finished down the field on his Greenham return, but Varian expects a much improved performance this weekend with underfoot conditions that bit easier.

"Belardo is in great form. His homework has been to a very high standard. He was unsuited by the fast ground at Newbury in the Greenham and, all being well, the ground won't dry out too much in Ireland," the trainer told his website.

"He was a high-class juvenile and I have every faith that he will show his best form again."

Tombelaine is an intriguing contender for the formidable combination of Dermot Weld and Pat Smullen.

The American-bred colt won the Tetrarch Stakes at the track earlier in the month and connections are keen to test his powers at a higher level.

Teddy Grimthorpe, racing manager for owner Khalid Abdullah, said: "He came across as a pretty good horse at two last year, I thought.

"It was just unfortunate that he kept bumping into some very good horses, the Ballydoyle hotpots.

"We were slightly worried when he made his comeback in the Tetrarch Stakes as the ground was very testing, but he seemed to handle it totally fine.

"This is a serious jump up in class, but I think he's earned it.

"It looks a hot race, though."

Gleneagles is one of three runners for Aidan O'Brien, with Ryan Moore's mount joined by stable companions Smuggler's Cove (Seamie Heffernan) and The Warrior (Joseph O'Brien).

Ger Lyons fires a twin assault with Endless Drama and Convergence in contention.

Watch live on RTÉ2 and on the RTÉ Player 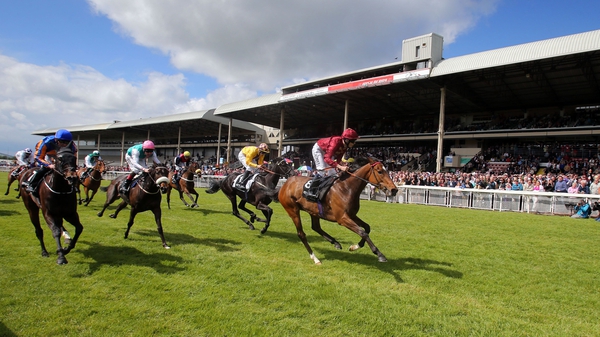