Success Days once again relished the testing conditions as he swept to an emphatic victory in the Derrinstown Stud Derby Trial at Leopardstown.

Surprise winner of the Ballysax Stakes over the course and distance four weeks earlier, flooring the well-touted John F Kennedy in the process, Ken Condon's admirable grey colt got his own way in front.

The 8-13 favourite never looked like being caught after he took several lengths from his three rivals on the turn for home.

Shane Foley rode him out as he pulled 10 lengths clear of Summaya in second.

The Group Three heat lost some of its gloss when Aidan O'Brien's intended runner Order Of St George was a late withdrawal.

The Dubai Duty Free Irish Derby remains the big target for Success Days, but he could be supplemented for the Investec Derby if the ground is soft at Epsom.

"He's very relaxed and has the temperament to keep improving. He obviously needs to, but he keeps delivering.

"The Irish Derby is on the agenda. We'll see how the Dante works out and, if it came up soft, we would have to give serious consideration to supplementing him for Epsom.

"If it doesn't I'd be happy to sit and wait for the Irish Derby."

Kissed By Angels, meanwhile, put her case for a Classic bid with an impressive success in the Derrinstown Stud 1,000 Guineas Trial.

Seamie Heffernan was happy to sit just off the pace set through the early stages by Red Ivy, but took closer order rounding the home turn and quickened impressively when asked in the straight.

Taking a couple of lengths out of the field, O'Brien's regally-bred daughter of Galileo stayed on strongly to score by three and a half lengths from Devonshire, with favourite Stormfly third. 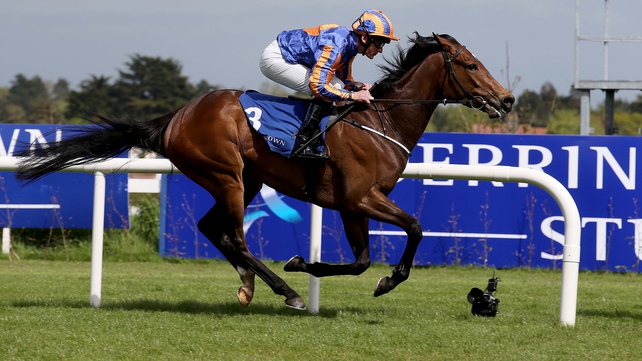 With O'Brien in France, Heffernan said of the 13-2 winner: "She's made good progress and improved a lot from her first run. I was a bit disappointed with her at Limerick.

"She travelled and quickened. The last day she didn't know what to do. Hopefully she'll keep making progress from each run."

Tommy Stack's lightly-raced four-year-old justified strong market support that saw his price contract to 15-8 favourite as he and jockey WM Jordan held on grimly from Sruthan.

Fire Ship was a close third after a gallant attempt to make all the running for jockey James Doyle and trainer William Knight.

Stack's son and assistant, Fozzy, said: "He needs soft ground. He's a tough horse and was the first off the bridle, but he kept going.

"He'll be aimed at Listed and Group races, but it's totally ground dependent where he goes."