Found, a late absentee from Sunday's 1000 Guineas at Newmarket, will instead face six rivals in the Canford Cliffs EBF Athasi Stakes at the Curragh on Monday.

Aidan O'Brien ran out of time to get the filly right for the Newmarket Classic, but the Ballydoyle handler obviously feels she is up to running in the Group Three, despite the ground likely to be very testing.

Favourite for the 1000 Guineas all winter, she met with a minor setback in the spring and O'Brien and his Coolmore bosses decided she was not up to competing at the highest level first time out.

Ryan Moore is going over to ride her.

"She had a little setback and we were afraid to force her too much, and it definitely wasn't the wrong thing not to run her (in the Guineas)," O'Brien told At The Races.

"We took the easier option to start her at the Curragh but the only thing is they had a lot of rain last night and the ground is heavy, hopefully she'll be able to go on it.

"If the ground is not too bad, hopefully it will be a nice introduction for her."

On the official ratings, her stiffest challenge should come from Paul Deegan's Avenue Gabriel.

She showed some smart form last season, finishing fourth in the Irish Guineas and winning a Listed race at Naas, but was disappointing on her return to action in heavy ground.

Her task is made even harder by the fact she has to give 7lb to the year-younger Found.

Tommy Stack's Alive Alive Oh looked like being a very smart filly two years ago but she never really progressed.

The five-year-old showed she may be coming back to something like her best when second to Fascinating Rock in the Heritage Stakes over a mile, but this is over a furlong shorter.

Stack's son and assistant, Fozzy, said: "It's probably not ideal that this is only seven furlongs, but the ground is going to be testing so that will be in her favour.

"She ran well last time out but this looks like being tough. It won't be easy, we're aware of that, and we'll be happy if she's third." 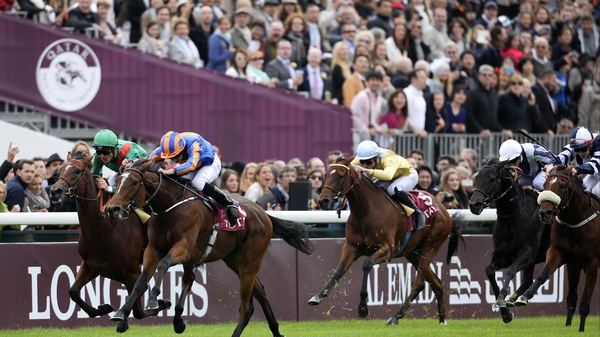 Boussac glory for O'Brien at Longchamp