Tony McCoy has revealed it is extremely doubtful he will hang up his saddle at the Cheltenham Festival.

The 19-times champion wants the chance to win a second Grand National, in which he is set to partner ante-post favourite Shutthefrontdoor, before he retires.

Speaking at a press conference at Oaksey House in Lambourn before being in action at Newbury, McCoy virtually ruled out ending his career after riding Carlingford Lough in the Betfred Cheltenham Gold Cup.

"It's very, very unlikely I will retire in the Gold Cup, I want to ride in the Grand National," he said.

"When I start something I want to finish it."

McCoy admitted it would only be right for his old adversary Richard Johnson to take over his crown.

Johnson has finished runner-up to McCoy 15 times and is the second winning-most jumps jockey in history.

Yet he has never lifted the title and is likely to take the bridesmaid spot for a 16th time this season.

"I would like Richard Johnson to be champion jockey. I wouldn't have achieved the numbers without him," said McCoy.

"He drove me from one end of the country to the other." 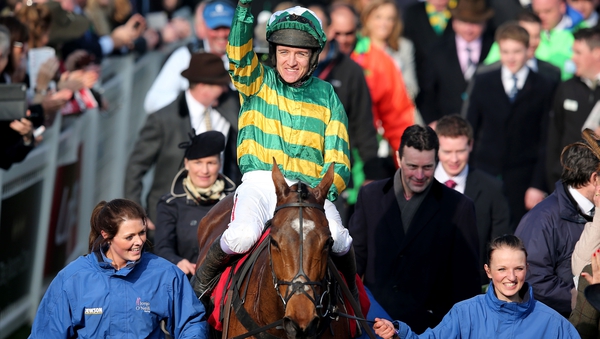 Cheltenham chances diminish for More Of That