Sire De Grugy came back unscathed with his rider Jamie Moore also none the worse for a departure at the third-last fence in the Betfair Price Rush Chase at Newbury as Mr Mole triumphed.

The reigning Queen Mother Champion Chase winner had made a couple of uncharacteristic mistakes ahead of his exit in the race registered as the Game Spirit, at which point he was struggling to peg back the slowly-away Mr Mole, ridden by Tony McCoy.

He was awkward at the cross fence and blundered at the first in the home straight. It was these sequence of errors that resulted in the nine-year-old's eventual unseating.

Paul Nicholls felt 10-11 favourite Sire De Grugy would have struggled to pick up the much-improved Mr Mole, who he compared to Master Minded, a winner of this race on his was to landing the Queen Mother.

Nicholls said of the 7-2 winner: "I think today was his Champion Chase, but to be honest to give away the ground he did at the start and to cruise into the race as well as he did, he is improving.

"The form he's in, why not [go for Champion Chase]?

"He's always been a bit quirky and at the start today he whipped round. He's just got that bit of character, but I've always thought he was very good from day one.

"It was a bit frustrating a couple of times last year when it didn't work out, but he has got confidence now.

"Once they get confidence and they are winning it makes a big difference and he could be very interesting now."

Frank Berry, racing manager to winning owner JP McManus, said: "He looks a very happy horse, Paul has done a great job with him. You'd have to be nearly thinking that way (Champion Chase) now."

Trainer Gary Moore said of Sire De Grugy: "He's OK, he's fine and he trotted up for the vet, he was happy with him.

"We live to fight another day and hopefully we will get him back right for Cheltenham.

"That was a one-off thing today, all horses are entitled to do that - let's just hope he doesn't do it again." 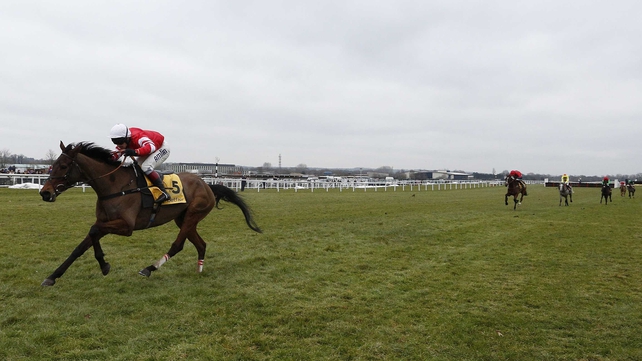 Mark Bradstock is likely to leave Coneygree in the Cheltenham Gold Cup at the next forfeit stage after the novice confirmed himself a high-class operator with an all-the-way success in the Betfair Denman Chase.

The 15-8 favourite put seasoned campaigners to the sword in the Gold Cup trial on just his third run over fences, jumping with aplomb to leave his more experienced rivals floundering.

Bradstock said: "That was pretty cool, he jumps so well. Richard said the ground was plenty tacky enough but he handled it and after he had pinged the cross fence it was 'away we go'.

"We will wait until Tuesday when we have to stump up £1,300 to keep him in the Gold Cup. Ultimately it will all be down to what the owners have to say, but one thing is for sure - I will sleep well tonight after a small celebration." 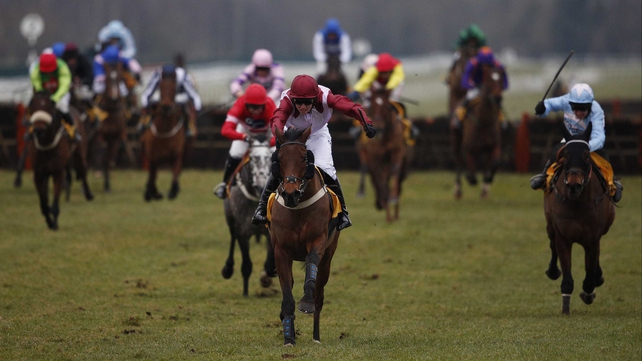 Violet Dancer produced a bold display from the front to land the hugely valuable Betfair Hurdle, giving the Moore team some consolation for Sire De Grugy.

Sent straight to the head of affairs by Josh Moore, the 20-1 chance had managed to build up a big lead approaching the third-last flight and kept up the gallop to come home by three lengths, giving Moore senior his third win in the race after Heathcote (2007) and Wingman (2008).

The trainer said: "It's the craziest day I've ever come across today. Three runners in the first and none ran very well - one bust his pelvis - and then Sire De Grugy and Jamie, then this horse goes and wins.

"Jamie won't be very happy as he was in limbo which one to ride, but Josh is a very good rider.

"Fair play to Hayley (daughter) she has done a lot of schooling with this horse and he's jumped so much better."

On a day that will always be remembered as the one where McCoy announced his retirement, the perennial champion had a double on the card, with Mr Mole's win adding to victory for the promising Qewy in the Feel The Rush At Betfair Novices' Hurdle.

The John Ferguson-trained five-year-old (9-2) rocketed six lengths clear after the last and Cheltenham could be on the cards.

Ferguson said: "He's in all three novice hurdles at Cheltenham, and now we can take our time but I would need to see further improvement before making any decision about which race to go for at the Festival."

Leading RSA Chase hopeful Kings Palace made it three out of three over fences in the Better Odds With Betfair Price Rush Novices' Chase - but it was far from plain sailing for David Pipe's charge.

The 2-13 favourite had already made mistakes at both open ditches when a serious error at the last ditch brought him to a virtual standstill, but he still had more than enough in the tank to repel his sole rival Vivaldi Collonges.

Pipe virtually ruled out the Gold Cup after that display and said: "I shall be speaking to the owners, but I think it is more than likely he will be going for the RSA."

That win brought up a double for Pipe after Bygones Sovereign produced an astonishing performance in the Betfair Home of The Price Rush Handicap Hurdle.

The Michael Heard-ridden 12-1 chance was allowed to build up a huge lead and that simply grew bigger in the closing stages as he scored with ease.

Pipe, celebrating his 42nd birthday, said: "It's a bit of a turn-up to say the least, but Michael has given him a fantastic ride. I do the hope the handicapper won't take it too literally, because the story of the race is that the other jockeys have given us too much rope."