Identity Thief created a good impression when making a winning debut over jumps in the At The Races Maiden Hurdle at Leopardstown.

The Henry de Bromhead-trained four-year-old, owned by Gigginstown House Stud, followed up his bumper success at Fairyhouse with a stylish display under Bryan Cooper.

Leading before the final flight, Identity Thief (7-4) shrugged off the attentions of the 6-4 favourite Snow Falcon to score by half-a-length. The pair pulled nicely clear of Okotoks in third.

"I'm delighted. He jumped well," said de Bromhead. "Bryan thought maybe a faster pace would suit him and we might drop him back and try the Deloitte here in February. We'll see how he goes after that.

"He was impressive in his bumper and kept the dream alive here today. He's a really nice young horse to have.

"The ground was pretty nice when he won his bumper and I'd say he pretty adaptable.

"Bryan said he didn't really want him winging the second last and getting there too soon so when he fluffed it he got a nice lead into the straight."

Identity Thief was quoted at by BetVictor at 25-1 first show for both the Neptune and Albert Bartlett at the Cheltenham Festival.

Usuel Smurfer (20-1) gamely fought off Off The Charts to cause a surprise in the Pertemps Network Handicap Hurdle (Qualifier).

Whatuthink led the field to the turn for home where he was swamped by a host of challengers headed by John Hanlon's six-year-old.

Usuel Smurfer, owned by Barry Connell, was driven out by Adrian Heskin to win by two and a quarter lengths. Zabana was third and Dara Tango fourth.

"That was lovely. Coming here I was very much afraid of the ground," said Hanlon.

"He could go for the Pertemps at Cheltenham, we'll see what weight he gets. He might have to go for another one.

"We'll stick him in a handicap and if he gets a nice weight, he'll go straight to Cheltenham. The better ground in Cheltenham will be a big plus for him.

"Hopefully he'll get a nice mark at the bottom of the weights. It was great to get one here." 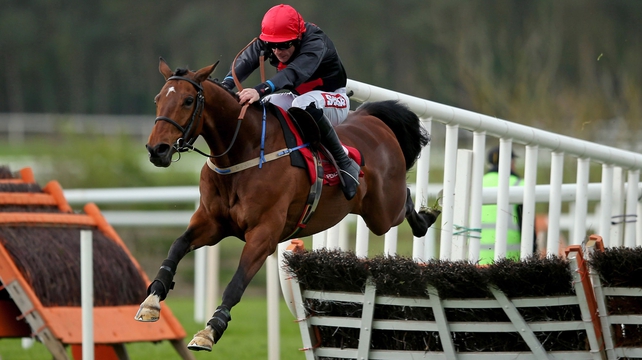 Davy Russell never let the front-running Balbir Du Mathan out of his sights and produced Liz Doyle's charge to lead early in the straight before they bypassed the final fence because of low sun to win by eight lengths.

Doyle said: "It's coming together with him. He made two shockers in Naas but still ran a really good race against a really good horse.

"Davy said he travelled so well and to keep him to two and a half miles for the time being. We'll probably go for the PJ Moriarty and have another look at him over the trip.

"I'm still not sure with him. His dam is by Dr Devious so he might be a three-mile horse. Davy was delighted with the way he jumped. He was good long and short and he got a great feel from him.

"I think the Martalines all want better ground. When he hit the better ground today coming out of the back, he picked up the bridle.

Le Vent D'Antan has been introduced at 16-1 for the JLT Novices' Chase and the RSA Chase by RaceBets.

"It's great. I'm delighted for the man who bought him. He bought him off Bill Moffett, who had a few too many horses. He recommended him to Dermot (Kilmurray) so it's worked out well," said Martin.

"It was typical Walsh. You're halfway there when you have him on your side.

"He can mix it. He won over a mile in Bellewstown and was placed in a good race at the Curragh.

"We'll get him home and enjoy today before making any plans."

It has not been the best of meetings for Mullins but at least he took the concluding race on day three in the Thornton's Recycyling INH Flat Race.

Up For Review (9-10 favourite), owned by Andrea and Graham Wylie, comfortably landed the odds by 10 lengths from Beyond The Obvious in the hands of the trainer's son, Patrick.

"I started working him in October and had him ready to run on 1 November, but I just did too much with him and he went over the top so I decided to put him away," said Mullins senior.

"He was doing fantastic work at home and today he showed that work was right. He set a very, very strong pace.

"Patrick has a clock in his head and I knew that if he was going that pace, he was comfortable doing it. He burned off his rivals and nothing had a chance.

"He has pace, he stays and he jumps. He's got everything and I think he's a really nice horse for Mr and Mrs Wylie.

"He's one to look forward to. We'll probably go the bumper route and go to Cheltenham. He's really a chaser in the making.

"He's by Presenting so his pedigree says he'll go on good ground and when you see him gallop at home he really flicks his toe out. The good ground at Cheltenham should suit."