Denis O'Regan's decision to make the journey home was fully vindicated when he produced Living Next Door with a typically patient ride to win the €190,000 Paddy Power Steeplechase.

A close fifth in the four-miler at Cheltenham in March, he had shown little in two runs this season but bounced right back to his best under his confident jockey.

Top weight Foxrock made a bold bid under Adrian Heskin and had everything else in trouble approaching the final fence, but O'Regan had stalked him into the straight.

Martin's eight-year-old put in a massive leap and the 20-1 chance saw off the 7-2 favourite by a length and a quarter. Vics Canvas was third with The Job Is Right fourth.

Martin said: "These are the sort of races you like winning. You target them, and it's wonderful that it's worked out.

"Every fence he made ground and (Denis) O'Regan gave him the ride of the year as far as I'm concerned.

"He lacks a bit of oxygen after his races. It's happened before and we just need to get him away (from the parade ring) quickly. He'll be all right.

"We'll have a think about where we go next but he won't be going anywhere for at least a month anyway." 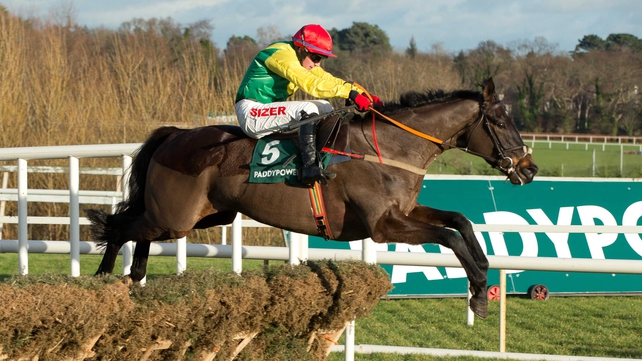 An eventful renewal of the Paddy Power Future Champions Novice Hurdle at Leopardstown went the way of Sizing John.

Willie Mullins saddled the odds-on favourite in Nichols Canyon, who was already a Grade One winner, but he was an early casualty, and stablemate McKinley was pulled up shortly afterwards.

Sizing John (11-1), highly regarded by Henry de Bromhead, made all under Johnny Burke and sprinted away from his two remaining rivals in the straight.

At one stage Tony Martin's Golantilla looked a threat but his run petered out and Sub Lieutenant stayed on again to grab second, although they were only playing second fiddle.

The silver lining for Mullins is that his Douvan beat the winner easily when they met earlier in the season.

It capped a great 10 minutes for De Bromhead, who captured the Desert Orchid Chase with Special Tiara at Kempton.

"There were a few incidents but it's great to win and a nice bonus. Our lad nearly ran out went the loose horse came by him. I'm delighted for Johnny as it's his first Grade One win," said De Bromhead.

"I was disappointed with him at Gowran, but they told me Douvan is very highly regarded. I always thought he wanted better ground and the plan was to back off him after this and look to the spring."

Des McDonogh unleashed a second smart debutant in the space of two days as Theophilus made a smooth introduction to the winter game in the Paddy Power "number 1 For Live Streaming" 3-Y-O Hurdle at Leopardstown.

Just 24 hours after Fiscal Focus made a winning start at 33-1, lowering the colours of Willie Mullins' Kalkir, Theophilus was sent off at just 4-1 in the same Jackie Bolger's silks.

No great shakes on the Flat, he travelled well and when another Mullins odds-on shot, Business Sivola, faded at the top of the straight, Theophilus kept on willingly to beat a couple of fellow newcomers in Hostile Fire and Battle Hymn by six and a half lengths in the hands of Danny Mullins.

McDonogh said "He got a superb ride from Danny. He was idling a bit in front and will be better in a better race. At the moment the two of them (including Fiscal Focus) will be aimed at the Triumph.
"Fiscal Focus is different gravy. I must say I am in awe of him. I may need a double horse box now for Cheltenham!" 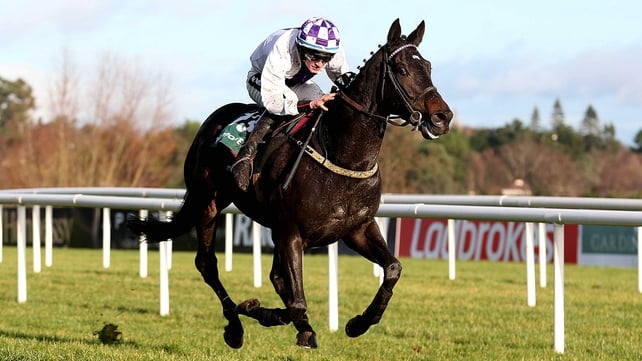 There was a big turn up in the Paddy Power Maiden Hurdle as Champion Bumper winner Silver Concorde was made to look ordinary by Blair Perrone.

Tony Martin's five-year-old was beaten a long way on his hurdling debut at Cork but looked a different proposition in the hands of Denis O'Regan.

Silver Concorde, a winner on the level since his Cheltenham success, was not fluent at the last for Davy Russell but such was Blair Perrone's superiority, it is unlikely the blunder had any bearing on the result.

Martin said: "Things just didn't go right for him the first day at Punchestown (in a bumper) when he was too free, and he needed the run badly at Cork the last day.

"He's always showed us that he's a good horse at home. The plan was to stalk the favourite and hopefully take him on as late as possible and it worked out perfect.

"He's a big horse and will make a chaser. He was schooled over fences and hurdles."

Shantou Ed provided JP McManus with a winner when holding off Rock The World in the Paddy Power Games Handicap Hurdle.

However, he fluffed the last while Shantou Ed flew it and galloped on powerfully to hold on by a length and a quarter at 8-1.

Fahy said: "Good As Gold and this horse both worked well in their last bit of work but after her run yesterday (fifth at Limerick) I was a bit worried. It's great to have a winner at Leopardstown and it's been a lucky track for me in the past.

"He could go for the Boylesports Hurdle here next month."