Tony McCoy is set to miss Cheltenham's Open meeting and has resigned himself to being out of action for around two weeks due to the recurrence of an injury suffered at Worcester a month ago.

The 19-times British champion jockey was initially sidelined for a short spell after taking a crashing fall from the Rebecca Curtis-trained Keep Presenting on 9 October, before returning only to be stood down after riding at Wetherby the following week.

McCoy had been in action every day since the start of the month, but he aggravated the injury in a fall from If In Doubt at Exeter on Tuesday, although he did ride at Chepstow on Wednesday.

This latest enforced absence is a major blow in his quest to ride 300 winners in a season. He was slightly ahead of schedule when bringing up the 150 on Goodwood Mirage at Wetherby on 15 October, but has just had two winners since then.

He gave up his only booked ride at Towcester on Thursday - a year to the day he rode his 4,000th career winner - and it seems unlikely he will be back for Cheltenham's prestigious three-day fixture that starts on Friday week, featuring the Paddy Power Gold Cup.

Speaking to the Daily Telegraph's website, McCoy said: "I went to see my sports medicine specialist Julian Widdowson this morning as I am very sore having aggravated an old injury at Exeter on Tuesday.

"It has been decided it needs some time and it will probably be two weeks before I go back and see him." 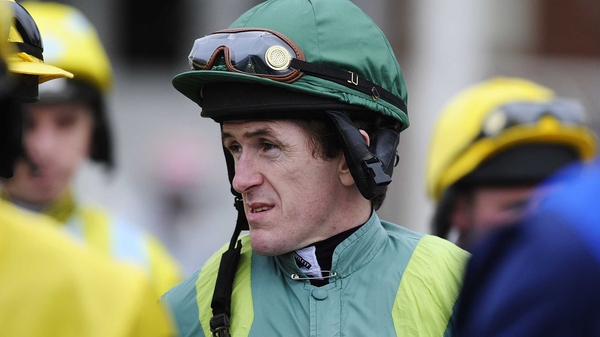