Mick Winters reports Rebel Fitz to be A1 following his triumphant return from injury at Listowel on Saturday.

While the Cork trainer will continue to keep an eye on his popular nine-year-old over the next few days, the early indications are the gelding has suffered no recurrence of the injury that forced Winters to scrap plans to run him at the Galway Festival.

"We don't seem to have symptoms whatsoever. We like just to wait a day or two before making a statement but he's been out this morning. He's cool, no heat or anything at this stage, so all is very good," said Winters.

"The worry was he'd only been back three weeks and he had been swimming and on the treadmill, but he was the best horse in the race anyway.

"It would have been an anti-climax if he hadn't been OK this morning. Thankfully he is and he has a ferocious following of people coming to see him at the races. It was great for the public and for us, of course.

"He's tired and a bit quieter than he would be normally. There's a hurdle race in Tipperary in a fortnight, the race he finished second to Captain Cee Bee (two years ago). It might be a bit near, we'll see.

"If he went there he'd have a break after that. Then we'd send him back chasing.

"We had been thinking of the Kerry National but with the ground quickening up there, we thought we'd go for a race on the Flat so there would be no stress on landing after jumping a fence." 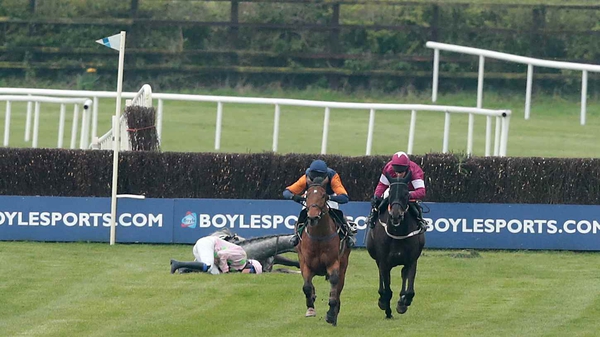