Tom Hogan's stable star Gordon Lord Byron was trying to become the first horse since Be Friendly in 1966 and '67 to win the race for the second time and he looked likely to do just that heading into the final furlong.

However, Danny Tudhope produced the David O'Meara-trained G Force (11-1) to lead in the dying strides, eventually prevailing by three-quarters of a length.

Music Master was third, with favourite Sole Power fourth after having to weave his way through.

Hot Streak set out to make all in the six-furlong heat and was tracked by Gordon Lord Byron, while Richard Hughes settled in behind on Sole Power.

The long-time leader eventually gave way, with Gordon Lord Byron assuming control as Wayne Lordan kicked on around two out.

However, Tudhope steered G Force to the middle of the track and switching back up in distance after tackling the Nunthorpe over the minimum trip, O'Meara's runner found plenty for pressure to win in style.

Hughes, meanwhile, was trapped in behind horses, being last at halfway, and only got daylight inside the distance, with Sole Power unable to use his potent pace to full advantage.

Tudhope said: "I can't believe it. I had every faith in this horse and he's shown some class to do that as a three-year-old.

"He's only small, but he has a massive heart and a great turn of foot.

"We were a bit unlucky (in the Nunthorpe), I think we would have been placed that day.

"He's a class horse and thankfully he got the breaks today."


Tom Hogan was satisfied with Gordon Lord Byron's effort but thought the ground may not have been ideal.

He said: "The ground rode a bit dead - that's the ground he really doesn't relish.

"I told Wayne to come two furlongs out, but, with hindsight, they possibly weren't the best tactics.

"The horse ran a great race and he will go to the Prix de la Foret now and we will be back here next year."

Eddie Lynam felt Sole Power was similarly unsuited by conditions.
He said: "Richard just came in and blamed the ground. He's run a good race and given 110 per cent and we are very pleased with him.

"I just said to Sabena (Power, owner) that his next run will be in France and then on to Hong Kong and Dubai.

"I think they will go faster (abroad) and the ground is quicker. I think there's a good one in him over six furlongs." 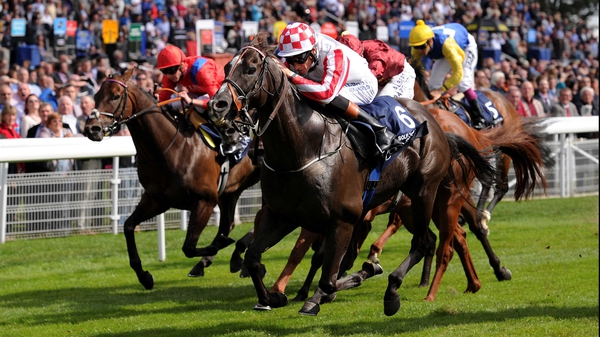