Kingman proved much too good for old rival Night Of Thunder with a scintillating display in the St James's Palace Stakes at Royal Ascot.

The John Gosden-trained Kingman was a hot favourite for the Qipco 2000 Guineas after blowing away Richard Hannon's Night Of Thunder in the Greenham Stakes, but the latter turned the form around with a 40-1 victory on the Rowley Mile.

With Kingman having since taken the Irish 2,000 Guineas, he was a heavily supported 8-11 market leader for the third clash and was settled towards the rear by James Doyle while Richard Hughes set out to make all the running aboard Night Of Thunder.

Just for a fleeting moment it appeared Kingman might struggle to reel in the leader turning into the home straight, but Doyle cut a confident figure throughout and once asked to extend his mount made up the ground in a matter of strides.

He began to hang towards the rail in the last half-furlong, but it made no difference to the result, with the odds-on shot passing the post two and a quarter lengths ahead.

Night Of Thunder ran a perfectly respectable race in second, but was no match for the winner on the day.

Outstrip bounced back from his disappointing Newmarket effort to finish third.

"It's almost as if they can't go quick enough for him, even when you go you feel like you've gone too soon" - James Doyle on Kingman

"That was awesome, that's the best way to describe it,” Doyle said.

"It's almost as if they can't go quick enough for him, even when you go you feel like you've gone too soon.

"He's got so much pace, he's almost climbing over the back of them wanting them to go quicker.

"I'm just very lucky to be sat on his back, I can't thank Prince Khalid (Abdullah) enough for giving me this opportunity.

"Nothing changed my opinion of him being the best three-year-old and we can forget the Guineas now - just look at that.

"I'll probably get a bit of stick for that (putting his finger to his lips on passing the post), I probably shouldn't have done it but I let myself go."

Gosden said: "He has fantastic acceleration, I sat down with James in the weighing room because I didn't want to get confused with everyone else's tactics in the parade ring. I said whatever they do, ride him cool.

"I was so impressed with their tactics. They took Toormore back and sent Night Of Thunder on and that was really clever because he stays well and James could have thought 'oh my god, what are they going to do'. 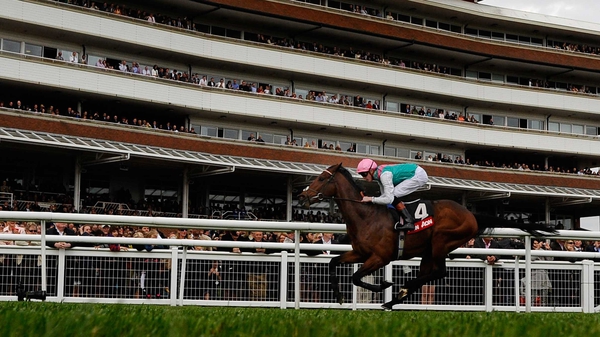 John Gosden happy with Kingman form ahead of Irish 2,000 Guineas