Aidan O'Brien believes he has "never had a horse" like Australia ahead of his date with destiny at Epsom on Saturday in the Investec Derby.

The master of Ballydoyle is one of the most successful trainers of the modern era and has saddled four winners of the premier Classic in Galileo (2001), High Chaparral (2002) and the last two winners Camelot and Ruler Of The World.

Both Galileo and High Chaparral were standout performers of their time, while Camelot came close to sealing the Triple Crown in 2012, but O'Brien rates his latest Epsom candidate the best Flat horse he has ever trained.

Bred to excel on the Downs as a son of Galileo out of 2004 Oaks heroine and brilliant racemare Ouija Board, Australia burst onto the scene with a scintillating victory at Leopardstown last September and the hyperbole continued into the winter and spring.

The three-year-old came up narrowly short in the 2000 Guineas at Newmarket behind Night Of Thunder and subsequent Irish 2,000 Guineas hero Kingman, but O'Brien insists Epsom has been his primary objective since day one.

"We don't take anything for granted ahead of any big race, we're always hopeful and never confident. We were happy with the horse at Newmarket," said O'Brien.

"Australia is uncomplicated, relaxed and has speed - exactly what you want in a racehorse.

"He's very natural and takes no training. He has a great mind and settles very well."

The trainer revealed he knew Australia was something out of the ordinary even before he first graced the racecourse last summer.

"From the time he worked, he always showed something different. In March and April of last year he was doing half-speeds with horses he shouldn't have been able to do it with," said O'Brien.

"When you see the splits in the Guineas they were all 11 seconds and looking at the video he was doing half-speed in the first half of the race. It was an unusually strongly-run race and he was cruising along.

"I'd never say the Guineas is a trial, but the reason we went was it was good ground and a mile on a straight course. It's the most straightforward trial for him. It is run over a straight mile and gave us a five-week gap ahead of Epsom."

Having never raced beyond a mile, Australia will be stepping into the unknown over a mile and a half, but given his stout breeding, connections are not anticipating any stamina issues.

O'Brien said: "I would be surprised if he didn't stay. He's never shown anything that would suggest it will be a problem.

"The guys couldn't believe they could buy a Galileo out of Ouija Board. It's very rare to get a horse like that and even more rare that they are good - most horses don't live up to expectations.

"He's a Derby horse like we've not had the likes of before. We've never had a horse like this."

Aidan and Joseph O'Brien became the first ever father-son combination to win the Derby when Camelot romped clear in 2012 and the young rider has been ever-present in the saddle during Australia's four-race career so far.

He feels his big-race mount may well have won the 2000 Guineas in different circumstances and is confident about his chances this weekend.

"I'd love to run the Guineas again. If we had all been in a group, I feel Australia might have won," said O'Brien jnr.

"He came into the race having won a four-runner race at Leopardstown and at Newmarket it's a big, open space for a relatively green horse.

"I would have loved a target for the last furlong but I had to go when I did.

"He ran a massive race and it was probably a very good Guineas."

Assessing his Derby credentials, Joseph said: "I wouldn't want to swap him for anything else at all - either in the Derby or back over mile. I like him and always have done.

"I really believe in the horse. To be successful, you have to believe in your own horse."

While Australia is undoubtedly the star name among the Ballydoyle three-year-old brigade, the colt is ably supported by three stable companions in Saturday's Epsom showpiece.

Orchestra earned his tilt with a narrow victory in the Chester Vase, but Ryan Moore has intriguingly jumped off him to ride Derrinstown Stud Derby Trial third Geoffrey Chaucer, leaving Seamie Heffernan to ride the Roodee winner.

The formidable quartet is completed by Dee Stakes scorer Kingfisher, the mount of Colm O'Donoghue.

The trainer said: "I was very happy with the way Orchestra won at Chester. If anyone had seen him there, they'd have seen that he had a bit of a tummy on him, and he'll come on for that.

"I wasn't sure he would get a mile and a half, even though his pedigree is very stout. I know Ryan Moore was also impressed with him at Chester and thinks he has a big chance in the Derby.

"Kingfisher won well at Chester and is very straightforward horse.

"Nothing went right for Geoffrey Chaucer in the Derrinstown at Leopardstown as it was a very messy race with a slow pace. Joseph had to go up the inside from where he was drawn." 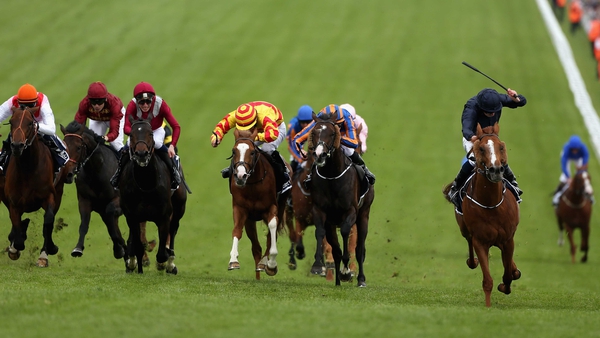 Australia to start from stall 12 in big-field Derby