Holywell followed up last year's win in the Pertemps Hurdle Final with a game victory in the Baylis & Harding Affordable Luxury Handicap Chase at Cheltenham.

Ma Filleule took a narrow lead over the final fence, but the Jonjo O’Neill-trained Holywell (10-1) battled stoutly up the hill to get his head in front and keep the mare at bay by a length and three-quarters.

The Package was seven lengths away in third with Green Flag fourth.

Richie McLernon was the lucky rider for the second year running as Tony McCoy was aboard O'Neill's other runner, the 7-1 favourite Alfie Sherrin, who was successful in this race for owner JP McManus in 2012.

McLernon said: "This lad has got a home for life with me if he needs it!

"He was dynamite. He jumped brilliantly and travelled - I took him some places and he got me out of them every time.

"He has a great trainer, the best in England and Ireland - he's brilliant and absolutely gifted.

"Today is what it's all about."

O'Neill said: "He's a great little horse to come back here and do that.

"Early on in the season he slipped into a fence at Carlisle and lost his confidence a little bit.

"It took him a while to get going and then we thought we had him going at Catterick.

"Then he was fairly average at Doncaster, I know he won but he was disappointing and I thought 'the fences are going to look very big on him at Cheltenham'.

"He's gutsy and Richie had him in the right place. He gave him a great spin and I only saw him miss one (fence).

"I'd say a big field and a good gallop suits him down to the ground.

"It's magic (to get a Cheltenham winner)." 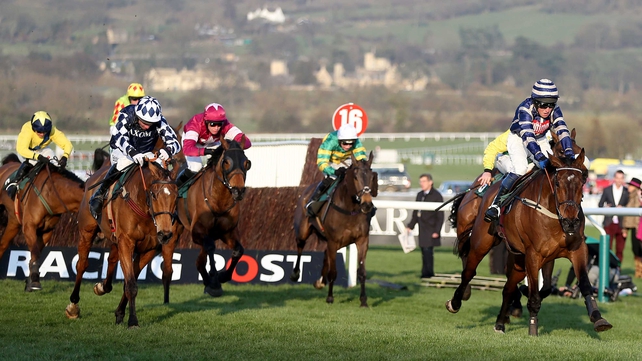 The 8-1 chance moved sweetly throughout the four-mile test and was one of a number of horses still in with a chance as the field rounded the home turn for the final time.

Leading fancy Shotgun Paddy did not jump as well as the winner, but appeared to have been produced to win by Derek O'Connor approaching the last fence.

However, Midnight Prayer jumped the obstacle the better of the pair and dug deep on the run to the line to prevail by a neck.

The eyecatcher of the race was the Willie Mullins-trained Suntiep, who was dropped out last for much of the journey by the trainer's son, Patrick, but flew home to pick up minor honours in third.

Well-supported favourite Foxrock was still in there pitching in the straight, but could not pick up as well as the leaders.

King said: "He was always in the right position and Josh gave him a beautiful ride.

"My thoughts are with the owner-breeder John Reynolds. He's 85 or 86. He got rushed away just an hour before the race with a massive heart attack. We just hope he's going to be all right."

Present View survived a lengthy stewards' inquiry to give trainer Jamie Snowden a first Festival winner as he held Attaglance in a dramatic finish to the Rewards4Racing Novices' Handicap Chase at Cheltenham.

Brendan Powell, who opened his account at this meeting 12 months ago, brought the 8-1 shot with a well-timed challenge to lead after the third-last.

Malclom Jefferson's Attaglance put in a strong challenge and his rider Brian Hughes made a daring bid to try to get up the inside on the run-in.

When the door closed, Attaglance was switched to the outside and closed the gap to half a length at the line. Pendra was three lengths away in third and Ahyaknowyerself  was fourth.