Tony McCoy has chosen to ride At Fishers Cross, instead of the fancied More Of That, in the Ladbrokes World Hurdle at the Cheltenham Festival.

Writing in his column in The Telegraph, McCoy said: "Having, hopefully, chosen right by going for My Tent Or Yours in the Champion Hurdle, the next big decision was whether I ride At Fishers Cross or More of That in the World Hurdle and I can reveal that I am siding with At Fishers Cross.

"He won last year's Albert Bartlett so we know he acts on the track and, having appeared to have lost the plot before Christmas, especially with his jumping, he was getting somewhere back towards his best in the Cleeve Hurdle when he was just touched off by Knockara Beau.

"He did beat Big Buck's however and, although I know Big Buck's will come on a huge amount and is still the one to beat, At Fishers Cross will also come on too."

The Rebecca Curtis-trained At Fishers Cross landed the Albert Bartlett Novices' Hurdle at Prestbury Park last March and after following up in scintillating style at Aintree, looked set to play a leading role in the major staying events this term.

However, he was well beaten on his return to action in the Long Distance Hurdle at Newbury and after parting company with McCoy when beaten at the final flight in the Long Walk at Ascot, his season looked in tatters.

He went a long way to repairing his reputation in the Cleeve Hurdle at Cheltenham at the end of January, though, beaten a short-head by Knockara Beau and finishing ahead of returning four-time World Hurdle hero Big Buck's.

More Of That, also owned by McCoy's retaining owner JP McManus, stretched his unbeaten record to four when winning the Relkeel Hurdle at Cheltenham in December, but Jonjo O'Neill's charge has not been seen since.

"With Sprinter Sacre coming out everyone now thinks they have a chance and I suspect there will be one of the biggest fields in the past 10 years," said the champion jockey.

"Sire De Grugy has the best form and is unquestionably the one to beat. Kid Cassidy is the only horse to have beaten him this season and that was at Cheltenham, but we were getting 10lb and I consider that a lot of weight.

"If it was only two pounds or three pounds you might have fancied your chances of beating him again, but I reckon we'll have a job on our hands now.

"I rode Kid Cassidy at Kempton where Nicky Henderson took 14 horses to work yesterday [Thursday]. I was very pleased with him. He pulled my arms out, but that's him, he's a very hyper horse. He is not actually that quick and if you let him go he would not go much faster. He does everything on his nerves.

"JP McManus has kindly consented to let me ride Taquin du Seuil in the JLT Chase even though he might have a runner and I believe Goodwood Mirage would have a terrific chance in the Fred Winter if the ground dries up.

"I was very pleased with his run last Saturday and he would be much more effective on better ground.

"Though Noel Fehily is due to ride him at Aintree, he will ride Silviniaco Conti in the Gold Cup, so I have pencilled myself in to ride Teaforthree.

"He may not be among the favourites but he will stay and he jumps." 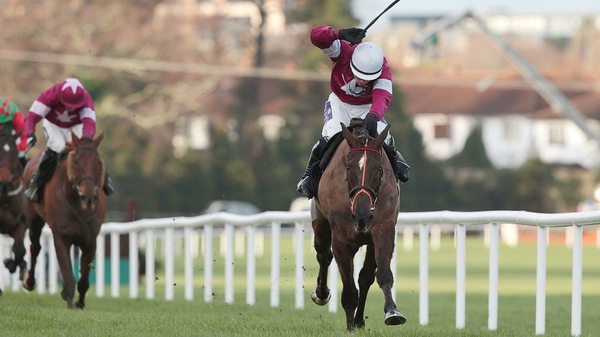