Arvika Ligeonniere turned the Boylesports Free Wifi Coming To Our Shops Tied Cottage Chase into a procession at Punchestown and is likely to head to Cheltenham for the Queen Mother Champion Chase.

The Willie Mullins-trained nine-year-old is five from five at Punchestown, having been beaten into third when favourite at Leopardstown over Christmas.

Special Tiara cut out the running, but Ruby Walsh's mount took much closer order with over half a mile to run and jumped three out with a fractional advantage.

That was extended significantly at the second-last and the race was over once the 2-7 chance pinged the final fence to come home unchallenged from Toner D'Oudairies.

Mullins said: "He was very, very good and very brave at some of his fences.

"We decided to let him roll along today. He fiddled one, the ditch at the bottom of the hill, but he jumped everything else very well.

"Ruby felt there was plenty in the tank, so I reckon we'll go to Cheltenham again, probably for the Champion Chase, although I've probably entered him in everything.

"He has won a Grade One going left-handed and if we don't go to Cheltenham, there is nothing else for him before the Festival back here."

The winner of three bumpers before making a winning debut over timber at Cork in January, the five-year-old went off the 6-4 second-favourite behind Lieutenant Colonel (5-4) and the front two in the market were always moving with menace in the Listed affair.

Lieutenant Colonel took over from fellow Gigginstown House-owned Real Steel after the second-last but could never get away from Walsh and Wicklow Brave, who cantered to the front approaching the final flight only to make a bit of a mess of it.

Soon on an even keel, however, he was gathered by Walsh to stroll home with lots in hand, a victory made all the more noteworthy as he was quite free-going in the early stages.

Mullins said: "I thought he could do something like that on good ground, but I didn't think he'd do it on this sort of ground. That will do him now before going across (to Cheltenham), I don't think he'll have another run before that.

"He pulled very hard and the pace they will go over there will suit him much better.

"To pull out what he did going to the last, having pulled as hard as he did in the first part of the race, was very good I thought.

Paddy Power cut Wicklow Brave to 16-1 from 33s for the Supreme, a move mirrored by RaceBets.

The race effectively turned into a sprint and it was the Enda Bolger-trained Love Rory, the 2-1 favourite, that got first run, with Big Shu putting in a huge effort on his first start since the big Punchestown meeting in April.

Early casualties had included the front-running Bishopsfurze, who never took off at one of the banks, where two others came to grief. All jockeys, including Patrick Mullins, walked away from the incident.

"He is a nice horse for a six-year-old and he was given a great ride again by Nina. He seems to like that ground. Taking on the second horse the next day will be different.

"He will be entered for Cheltenham, but I keep telling myself that he is only a six-year-old."

Conor O'Dwyer's Folsom Blue returned to his best to land the Claim Your One Month Free Trial At Racinguk.com Grand National Trial Handicap Chase in the hands of Bryan Cooper.

Grade Two-placed as a novice hurdler, and also a Listed-race winner, the seven-year-old was getting off the mark over fences at the fourth time of asking, beating Sole Witness by three and a half lengths.

Dwyer said of his 7-1 winner: "It was a great run for his first handicap. He loves that bottomless ground.

"We will have to look at the Irish National now, but he would need plenty of cut in the ground. He is only small and his low weight made a big difference, too." 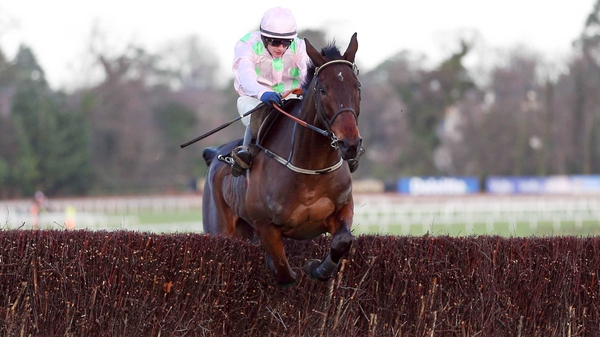