Dermot Weld's new association with the Aga Khan got off to the best possible start when Balansiya struck by seven lengths at Leopardstown on Sunday.

The Shamardal filly earned quotes of around 16-1 for next year's 1000 Guineas at Newmarket following her genuinely impressive display in the Irish Stallion Farms EBF Fillies Maiden.

Balansiya was sent off the 11-4 joint-favourite to make a winning racecourse debut and readily accounted for market rival Upper Silesian in the hands of Pat Smullen.

The two-year-old was the first Weld-trained runner for the Aga Khan since the powerful owner-breeder increased his roster of trainers in Ireland earlier in the year.

"That was a nice performance by her"

Weld said: "That was a nice performance by her.

"She had been working nicely and the few drying days helped her as I think she is a good-ground filly really.

"She wouldn't have wanted it any softer than that.

"She is just a lovely filly and hopefully she will make into a stakes filly for next year."

Weld's other runner for the Aga Khan, Rousayan, finished third in the Irish Stallion Farms EBF Maiden after duelling with Screenshot through the final furlong.

The pair were cut down by Aidan O'Brien's newcomer Blue Hussar (7-2 joint-favourite), who flashed home late under Seamie Heffernan to win by three-quarters of a length.

Heffernan said: "He was the best horse in the race. I was told to take my time on him and he won well in the end.

"He is a Montjeu with a lot of ability and hopefully he will progress."

Weld did, however, secure a double when 14-1 chance Elegant Peace, ridden by Leigh Roche and owned by John Malone, showed plenty of guts to deny Balmont Blast in the www.leopardstown.com Nursery over seven furlongs. 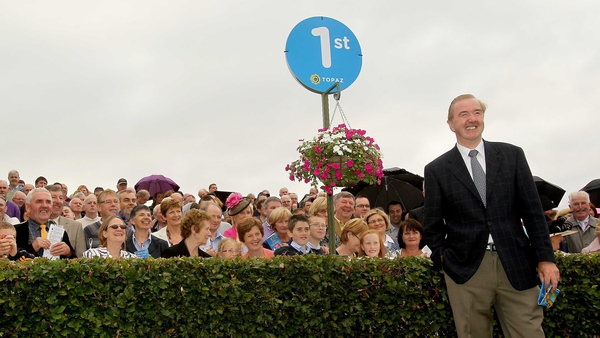