Ave struck for the Newmarket trainer in 2009 and Mango Diva continued her progression after landing a Listed race at Salisbury last month.

Last year's winner Aloof made the running until two furlongs out where Uleavemebreathless came with a strong run that looked like prevailing but it was covered by Johnny Murtagh on Mango Diva.

Leading inside the final furlong, the 7-4 favourite drew clear in the closing stages to win by one length.

"She pulled up a bit after she hit the front, she's a bit cautious and was watching everything but she is going the right way," said Murtagh.

"When I eased her out I always thought I was going to win.

"I gave her a smack and she quickened up well - she's with the right man."

Mandatario (13-2) made a winning start to his career when hanging on for victory in the Powerstown Stud European Breeders Fund Maiden.

In doing so, the Jim Bolger-trained newcomer was following his top-class stablemate Trading Leather, who won this mile event 12 months ago.

Kevin Manning's colt was in the box seat two furlongs out but had to withstand a strong challenge from Kerkeni, who made up plenty of ground before failing by a short head.

Bolger was at Croke Park for the All-Ireland Football final, but his assistant Ger Flynn said: "Kevin said he's a big immature horse but he was smart away and did it well.

"It's very unusual to win here from such a bad draw (14) and he looks like a nice horse for the future."

Odisseia (6-1) got off the mark at the fourth attempt with a gutsy performance in the Dining Packages on gowaranpark.ie Nursery.

Eddie Lynam's youngster was handy throughout and found plenty when Ava's Star put down a strong challenge through the final furlong and a half to win by half a length under 5lb claimer Colin Keane.

Lynam was represented by his brother, John, who said: "She kept at it well and we're in the hands of the handicapper now."

Sretaw stayed straight on the far side after being driven by the in-form Chris Hayes and was a length and a quarter to the good at the line.

"I was just told to make use of the draw (one), but I kept having to pull back and give away ground," said Hayes.

"Turning in I was starting to make up my excuses, but it just opened up like the red sea and she won snug enough in the end."

Wagadoogoochoochoo (20-1) shed her maiden tag at the 10th time of asking when coming with a sweeping run to take division two and give Castlecomer-based Pat Murphy a first training success.

The four-year-old quickened up smartly for Declan McDonogh to account for New Regalia and Hoppsan by two and a half lengths and a head.

King Of Oriel (6-1) proved three-quarters of a length too good for the favourite Carenza in the Gowran Golf Memberships For 2014 749 Euro Apprentice Handicap.

Winning rider Marc Monaghan said: "He's a nice little horse and he just got nabbed on the line at Fairyhouse. I tried to keep him covered up as long as I could and when I went for him he kept going well."

The Michael Halford-trained Castle Guest justified 4-1 favouritism when galloping to a two and a quarter length call under Shane Foley over Magnolia Ridge in the gowranpark.ie Rated Race. 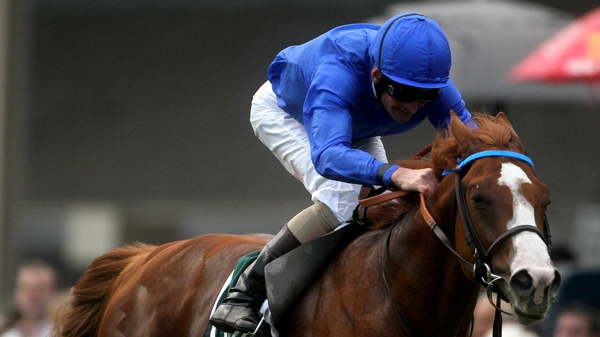