Leading Light gave trainer Aidan O'Brien his fourth Ladbrokes St Leger and his son Joseph his first as he stayed on strongly at Doncaster.

The combination had been disappointed 12 months ago when Camelot failed to complete the English Triple Crown, but the 7-2 favourite was more than up to the task.

Ridden positively, the Queen's Vase winner finished a length and a quarter clear of the Oaks heroine Talent and the twice Classic-placed Galileo Rock.

Mickael Barzalona, who had wrecked Coolmore dreams aboard Encke 12 months earlier, decided to make the running with Cap O'Rushes, but they were starting to feel the pressure turning for home.

Leading Light, whose previous outing had been over two miles at Royal Ascot in June, was never too far away and O'Brien junior kicked on reasonably early to make use of his stamina.

Talent, who was bidding to become the first filly to land the Leger since User Friendly in 1992, got in a little barging match when trying to make her move from the rear, but the cheekpieced Leading Light was in full control by then.

Galileo Rock, whose trainer David Wachman made an extremely late decision to take his chance after grave concerns about the ground, ran a very respectable race and was just three-quarters of a length behind Talent.

The winning jockey said: "He jumped a bit slowly and I could see a couple of horses going forward, I knew we weren't going to go much of a gallop so I gave mine a kick just to get up there.

"He's quite lazy in his races, he wears cheekpieces and I got him going plenty early - I knew if I didn't hit him until a furlong and a half out he would win." 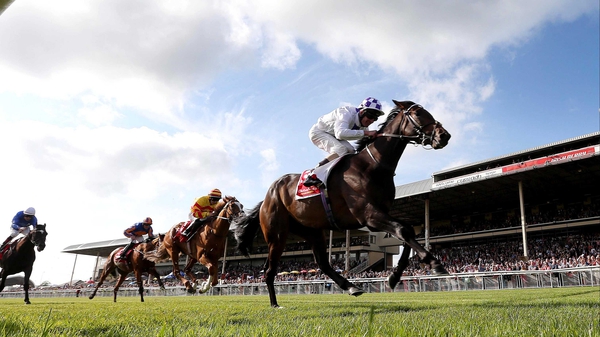