There was a shock result to the Keeneland Phoenix Stakes at the Curragh as red-hot favourite War Command could finish only third behind David Wachman's Sudirman.

The Aidan O'Brien-trained War Command ran out a brilliant winner when 20-1 for the Coventry Stakes at Royal Ascot.

He was unsurprisingly far shorter odds to make it three wins from as many starts, being sent off the 2-5 favourite.

However, with Mick Channon's Ambiance setting a fierce pace, it was clear a long way from home that War Command was in trouble.

Joseph O'Brien was hard at work in the saddle from well over a furlong out.

Sudirman, winner of the Railway Stakes over course and distance in late June, was a 4-1 shot in the hands of Wayne Lordan and moved sweetly throughout.

Railway runner-up Big Time came to challenge his old rival in the closing stages, but just as he had done 43 days earlier, Sudirman held on by half a length.

To his credit, War Command did respond to pressure, finishing a further half a length away.

Trainer David Wachman said: "He's a good tough horse, he won't do too much when he gets there, he idles in front.

"He did it well, he's tough and keeps finding. There was a good bit left in the tank.

"I'm delighted for Wayne, we have been waiting on one of these for a while and have been knocking on the door.

"We'll probably step up to seven furlongs, he's been crying out for that trip. The National Stakes is a possibility but the ground is an important factor in where he goes."

War Command's trainer Aidan O'Brien had better fortune with Tapestry, who cemented her position as a leading hope for next year's 1000 Guineas with a ready success in the Friarstown Stud Debutante Stakes.

Stablemate Perhaps led the way in the Group Two contest and stuck on well to finish second, but the race was quickly over when Joseph O'Brien unleashed the 4-5 favourite inside the final furlong. She swept past to score by a length and three-quarters.

Tapestry is a daughter of dual Group One winner Rumplestiltskin and another regally bred Ballydoyle youngster, Terrific (9-4), led all the way in first-time blinkers to take the Irish Stallion Farms EBF Fillies Maiden, holding favourite Gorteo by half a length.

It was a big day for Wayne Lordan, who followed up his victory on Sudirman by landing the Paypal Supporting Irish Autism Action Phoenix Sprint Stakes on the Eddie Lynam-trained Slade Power (2-1), who was always travelling best and beat Hamza by a length and a half, with favourite Sea Siren a disappointing third.

Mark Johnston's prolific winner Maputo (5-4 favourite) took another step up the ladder when leading inside the final quarter-mile and readily holding Caponata to take the Bet Online At thetote.com Royal Whip Stakes (Group Three) by a length under Joe Fanning. 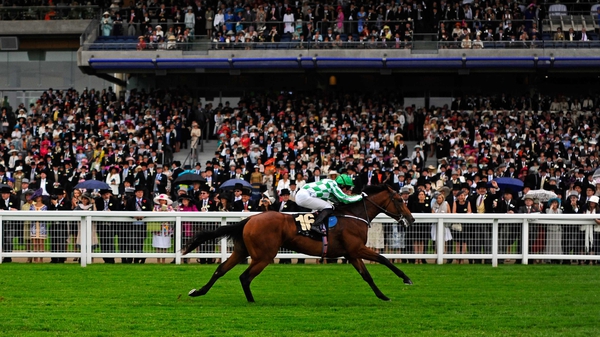