Busted Tycoon achieved a remarkable feat as victory in the Vision Express European Breeders Fund Mares Handicap Hurdle gave the Tony Martin-trained four-year-old a third win of the week at the Galway Fesitval.

Successful in effortless style on the Flat on Tuesday night, Martin's charge had repeated the trick in similar fashion on Saturday.

Giving all the signs she was ready for a further challenge, she teamed up with Ruby Walsh who took a position in mid-division in a race run at a stop-start gallop.

Making up ground two out, Walsh took the decision to switch to the inner at the last but there was a scare as his mount was not fluent at it.

However, the 11-10 favourite showed the requisite guts to go with her talent as she picked up to get the better of Theonewiththeleg by half a length, giving Martin his eighth winner over the seven days.

Martin said: "It's magic, I'm delighted for the people involved with the filly, she's very tough.

"It's nice to be part of history. It's tribute to John and Debbie (Breslin, they are great owners and they give me free hand to do what I want so it's nice it's worked out.

"It was vital the way Shane (Shortall) rode her on Saturday that he left enough in reserve for today."

"She's a tough mare, she has to be to win three times in a week, especially considering she only won last night" - Ruby Walsh

"If you saw her this morning you would never think that she had a race at all. To be honest at the start of the week I was hoping to get two runs into her and never really dreamed that she could win three in a week.

"I thought I'd run her twice but I gave her the option of last night and today. I fancied the Flat race but just in case it was called off or anything went wrong we left her in today.

"The way she took Tuesday's race going into Saturday and how she was today we thought we'd give her a shot, you wouldn't have guessed this morning she'd run last night.

"We'll give her a pull now and see what the options are later in the year.

"You could never picture having eight winners over the week. You always need a bit of luck. I thought Another Ambition was one of my best chances this week but he fell on Friday.

"This is such a unique meeting and you have to set your stall out well in advance as it's so competitive."

Walsh said: "She's a tough mare, she has to be to win three times in a week, especially considering she only won last night.

"She jumped well, she travelled well and she battled when she had to.

"They went quick early but then they stopped. In fairness to her she stuck her head down to battle to the line."

Dermot Weld recorded his 11th winner of the big meeting as even-money favourite Notable Graduate foiled a bold bid from The Black Russian to land the Trappers Inn Maiden Hurdle.

The latter built up a healthy lead early on and while Notable Graduate had narrowed the gap going to the second-last, a mistake at the final obstacle meant it needed Derek O'Connor at his strongest to secure a length-and-three-quarters triumph.

In a race run to suit those with proven stamina on the tacky ground, the Jimmy Finn-trained seven-year-old was held up through the early stages and was always likely to be doing is best work late as a winner already over a longer trip.

Taking closer order five from home, he was under pressure a fair way out but Eddie O'Connell's mount, who had previously just been touched off at Tipperary, relished the long run from the last, eventually coming eight and a half lengths clear of Darenjan.

A second outing of the week for Darwins Fox reaped the perfect dividend as Henry de Bromhead's seven-year-old ran out a comfortable winner of the Easy-Fix Beginners Chase.

Always stalking Walsh on Nearest Pin, the Andrew Lynch-ridden 15-8 favourite was given a reminder a furlong and a half out before picking up to reel in Tony Martin's charge after straightening for home.

The winner had tuned up for this race when an excellent second to the impressive Union Dues in a mile-and-a-half amateur riders' race on the Flat on Wednesday.

A Listed-race winner over hurdles early on in his career, Darwins Fox was winning for the first time over fences at the sixth attempt. 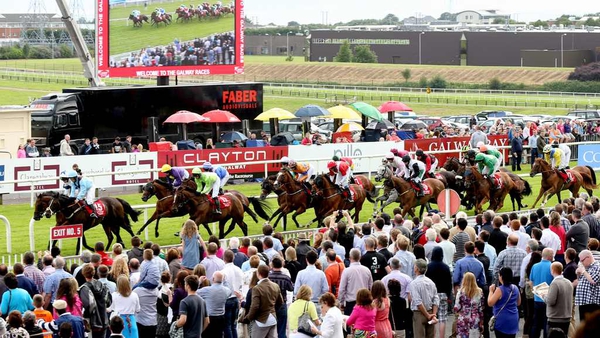