Did you know that there are ATM machines in London that offer you the language of Cockney?

It’s quite amusing to be asked if you would like your money in Lady Godivas (fivers). No Cockney, it seems, when you select the Euro.

Ireland's Paralympics so far has gone better than could have been expected, and life over here has gone a little crazy.

"When asked before I came over, my response was always that our goal was to equal the medal tally from Beijing - five in total. Never did I think we would be where we are now, and so soon"

When asked before I came over, my response was always that our goal was to equal the medal tally from Beijing - five in total. Never did I think we would be where we are now, and so soon.

I really hope you have been able to take in the splendour of these Games, and what this Irish team is achieving.

I took the role of Paralympics communications officer as I had a passion to change things around, to assist in moving Paralympic sport out of the shadows and into the limelight.

I hope this time around you know what I am talking about, and have seen the images.

There is another impact to all of this success in that unsolicited affection is growing out of control and Irish success is becoming a talking point in the Olympic Stadium.

Random people requesting high fives; unceasing references to “Top o’ the mornin’ to ya”; and worst of all, the hugs that are now starting to come in from the medal winners.

On Monday, I met an exuberant Michael McKillop as he left the TV cameras to meet us.

The joy of winning resulted in Michael giving affectionate hugs of celebration to those around him, and I was yet again in the firing line.

Unexpected, but I suppose beggars can’t be choosers, and at least there was no pink lipstick.

Michael had no idea that it had been arranged that if he won his 1,500m event, his Mum would present his medal to him. 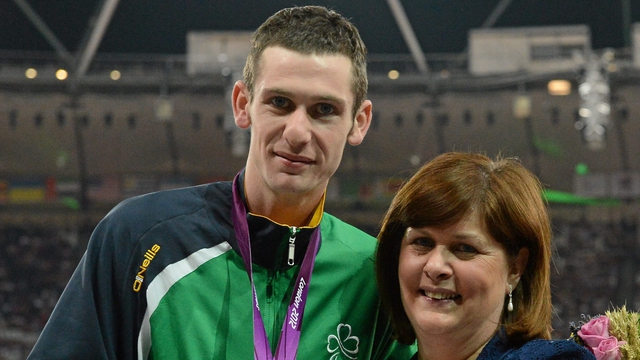 As an ambassador of P&G, this was made possible, and Michael’s complete surprise as his mother walked out onto the track was one of the most powerful and emotional moments of the Games.

I have never seen it before, and to be honest, whoever made this happen reminded us all of what is important in life; tears at home and abroad.

Irish Super Saturday was a special night, which I will remember for a long time. But not for the reason you may think.

As I left the stadium late that evening, I looked down at my wheelchair tyre to see a big Irish tricolour pin stuck in it.

"Before long, I was running on flat. How ironic is it that on Irish Super Saturday I got taken out by an Irish tricolour pin"

Before long, I was running on flat. How ironic is it that on I got taken out by an Irish tricolour pin.

Surely the mobility desk will help, I thought? Surely at a Paralympic Games with thousands of wheels roaming around the place there would be a puncture repair kit?

Three hours later, I was sitting in the main press centre with the LOCOG Logisitics manager and some other helpful assistants changing my wheel for me with a repair kit sourced from the Irish team.

Apparently punctures had not been considered a possibility.

I normally travel with a puncture repair kit, but I had decided there would be no need for one on this trip.

The good news is that I got a promise that the following day every station in the park would be told to get a puncture repair kit.

So, I have made a difference, just not in the way that I had imagined.

Over the next few days watch out for Jason Smyth again in the 200m and Mark Rohan in handcycling.

Maybe I should have taken that Paddy Power 5/4 bet on the Paralympic medal haul more seriously.

*John Fulham is the Paralympics Ireland communications officer. He is also a former 100m and 200m IPC European champion and four-time Paralympian.