Minister for Sport Jack Chambers has said it is unacceptable for gymnast Rhys McClenaghan and other athletes from Northern Ireland to be prevented from competing in the Commonwealth Games because they have previously represented Ireland.

Minister Chambers has called on the International Gymnastics Federation, the FIG, to reflect on their position and in the spirit of the Good Friday Agreement allow the athletes including McClenaghan, Eamon Montgomery and Ewan McAteer compete for Northern Ireland.

McClenaghan, who won a gold medal at the 2018 Commonwealth Games, has been told by the FIG that he may have to give up his Irish nationality if he is to defend his title in Birmingham.

Minister Chambers told RTÉ Sport: "I absolutely support the efforts of Rhys McClenaghan and the other athletes who should be allowed compete in the Commonwealth Games. It's a regressive decision from the International Gymnastics Federation.

"I've written to them myself in recent days to demonstrate the Irish Government’s support for them competing in the games and in the spirit of the Good Friday Agreement all the athletes should be allowed compete and to continue their involvement in the games."

When asked did the International Gymnastics Federation completely disregard the accord, he replied: "It’s certainly not in the spirit of the Good Friday Agreement in their decision and putting an athlete in the space they’ve left them in is not acceptable.

"I think the International Gymnastics Federation need to fully reflect on it and do what other associations have done and implement that in the spirit of the Good Friday Agreement.

"The athletes have our full support, I’ve fully reflected that in a letter to the International Gymnastics Federation in recent days and they should be allowed compete in the Commonwealth Games in the spirit of the Good Friday Agreement.

"We’ll do every we can to support their cause and allow them to compete in something they have competed in before. I think it’s a basic right in sport."

Northern Ireland Secretary Brandon Lewis has also called for the decision to ban the three gymnasts to be overturned.

Rhys McClenaghan says it is "morally wrong" for the International Gymnastics Federation to prevent him and two other gymnasts from competing for Northern Ireland at this summer's #CommonwealthGames #rtesport #rtenews @GymnasticsIre pic.twitter.com/GDcAumKOeo 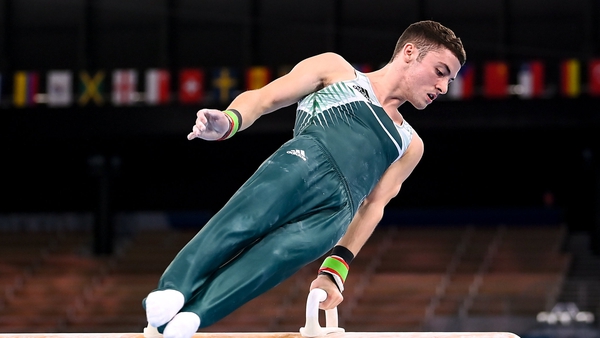