The eight-strong shortlist of nominees for the RTÉ Sport Sportsperson of the Year award features six women after a historic 2021.

Tipperary jockey Blackmore became the first woman to win the Aintree Grand National aboard Minella Times, which came after she was the first female to be crowned 'Top Jockey' at Cheltenham Festival, with six wins, including in the Champion Hurdle with Honeysuckle.

Clontarf swimmer Keane won her first gold at her fourth Paralympics Games, claiming Ireland's first medal in Tokyo. The 26-year-old took gold in the SB8 100m breaststroke with the best performance of her life.

Limerick hurler Lynch hit six points as the Treaty defeated Cork in the All-Ireland final, his dominant display at the end of a superb season deservedly earning him the man-of-the-match award.

Cavan golfer Maguire started the year at 177 in the world rankings but had jumped to 43 by season's end, thanks to a host of consistent performances on the LPGA Tour. She also competed at the Tokyo Games and starred for the victorious Team Europe in the Solheim Cup, taking 4.5 points out of 5 - a record for a rookie.

Derry sprinter Smyth won Paralympic gold for the sixth time - and fourth Games in a row - after a dramatic T13 100m final in Tokyo, edging Algeria's Skander Djamil Athmani in a photo finish by just 0.01 seconds to cement his place amongst the Paralympic greats.

'Pride of Bray' Taylor remains the undisputed lightweight world champion after twice this year successfully defending her titles. Natasha Jonas was beaten on a hard-fought points decision in Manchester, before American Jennifer Han was defeated with ease in Leeds. Taylor fights Firuza Sharipova on Saturday night in Liverpool.

Meath footballer Wall was to the fore as her team claimed a first ever All-Ireland Senior title. The Dunboyne star scored 1-06 during the Championship, and produced a 'Player of the Match' performance in their famous final victory over Dublin. Named the Senior Players' Player of the Year after a superb attacking display for the Royal County.

Joanne Cantwell and Darragh Maloney will present the RTÉ Sport Awards 2021 on Saturday 18 December on RTÉ One.

The Sportsperson of the Year is selected by a judging panel. The criteria can be read here. 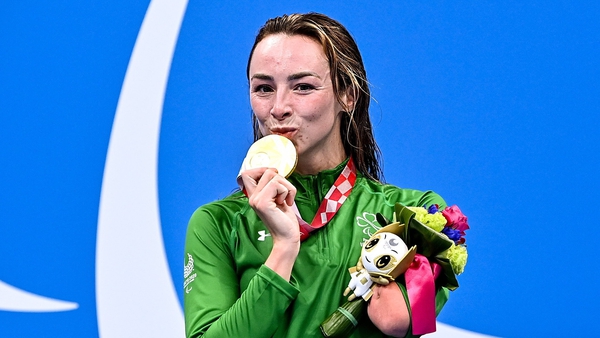