Signs of Foot and Mouth were found in 27 pigs. As samples were analysed, the virus, it is now believed had already spread to 57 farms elsewhere in the United Kingdom.

A sense of urgency immediately took hold on this island to prevent the disease from arriving here. The Department of Agriculture and the government acted swiftly to contain the spread. Despite the restrictions that were put in place and additional security at the border to ensure compliance, cases were confirmed in Meigh, south Armagh and at two locations in Co Louth (the only outbreaks in the Republic).

And while the impact on the agricultural sector was stark, with the cull of 13,000 sheep and 3,000 cows within an exclusion zone in Co Louth, the control measures impacted everyone. Sport saw its schedule thrown into disarray . 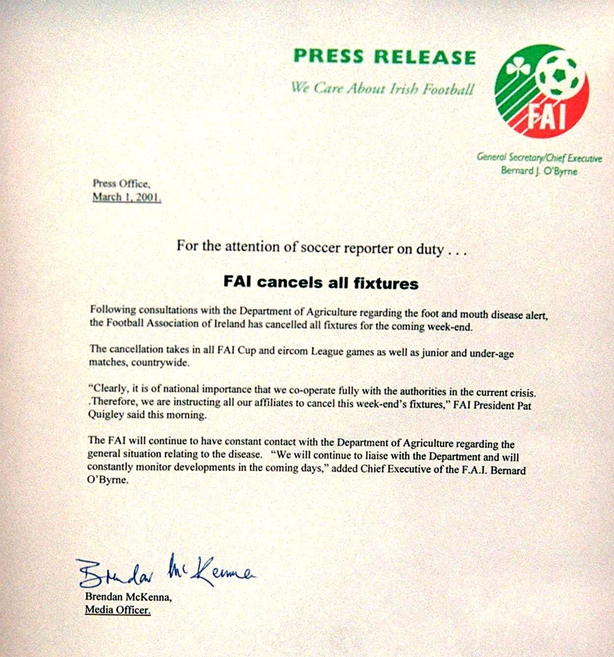 On Tuesday, 27 February, it was announced that Ireland would not be travelling to Cardiff to take on Wales in the Six Nations. The fall-out from that decision would ultimately lead to a standstill in the Irish sporting calendar for a number of weeks. Horse racing called a blanket ban on all activity, with greyhound racing and motor racing soon following.

The GAA then suspended the Allianz League programme, while the IRFU also imposed a nationwide ban on its members fulfilling their fixtures. The FAI then scrapped all its fixtures, while basketball, boxing, hockey, badminton, athletics and rowing federations took similar action.

There was, however, some live action to watch. The Republic of Ireland, while adhering to strict measures, were allowed to travel to Nicosia and Barcelona for World Cup qualifiers against the Cypriots and Andorra. Mick McCarthy's men won both games comfortably.

In 2001, 33% of Ireland's Gross Domestic Product was generated through agriculture, so it was no surprise that 'Operation Ringforce' was being treated seriously. Disinfected mats were placed at entrances to every building.

Sport had to be sacrificed for the common good. And while extreme caution was being deployed on this side of the Irish Sea, the various sporting bodies in the UK were, with minimum disruption, pressing ahead with their schedules. Racing returned after an eight-day suspension, though the Cheltenham Festival was a notable casualty because of its proximity to an outbreak.

The England-Scotland Six Nations game, scheduled for the same weekend as the planned Wales-Ireland game, did go ahead. The UK government were happy for events to proceed if they were outside the designated 10-mile exclusion zone surrounding each identified case. The Premiership, as it was known then, continued without any interruption.

After the expiry of the incubation period of 30 days from the only case in the Republic of Ireland, the EU declared the country free of Foot and Mouth on 19 April.

Normality on the sporting fields and pavilions would return. The Irish Grand National took place three weeks after its traditional Easter Monday scheduling. Unfortunately Punchestown was not able to stage their time-honoured National Hunt Festival, but a 'festival' of sorts did take place at Leopardstown. GAA action returned with Mayo winning a first football league title in 31 years. In the League of Ireland, Bohemians would go on to complete a league and cup double.

The 2001 Six Nations was eventually completed in the autumn. After wins over Italy and France, there were high expectations that Warren Gatland's Ireland could complete the 'Grand Slam'. On a September afternoon at Murrayfield, such hopes were dashed as the Scots ran out 32-10 winners.

A week later, Gatland's side dusted themselves down to account for the Welsh in Cardiff, before ending England's Grand Slam ambitions with a 20-14 victory at Lansdowne Road.

Keith Wood "on the peel" getting an all-important try in the first half. 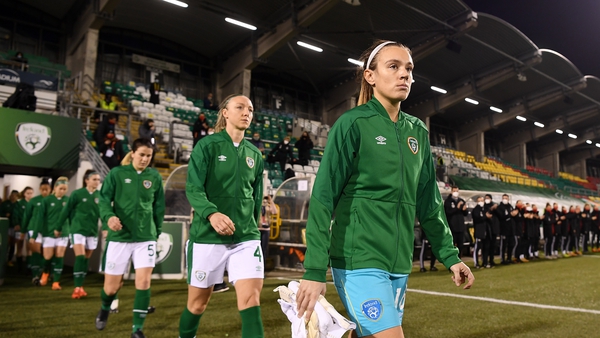 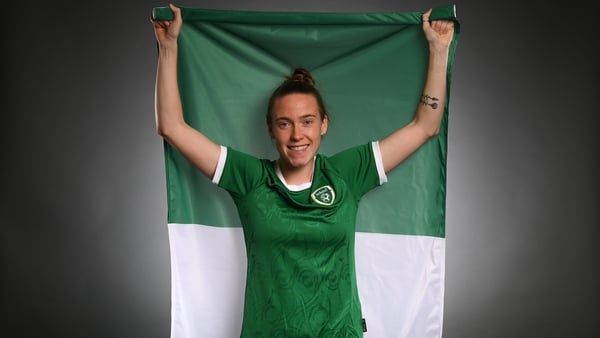 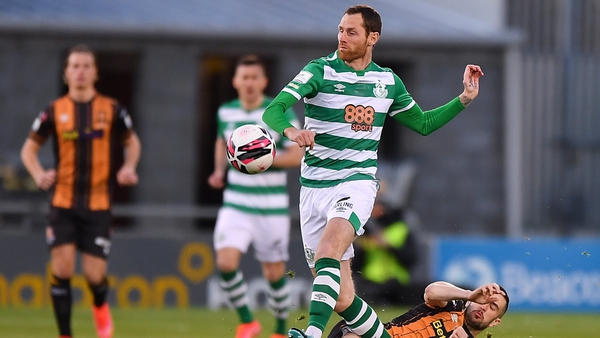