The popularity of Gaelic games, Katie Taylor's enduring appeal and the achievements of Dublin in winning six in-a-row are all reflected in the findings of the Teneo Sport and Sponsorship Index (TSSI) 2020, which were released today.

Gaelic games held on to top spot as Ireland's favourite sport(s) for the third year in a row on 24%, ahead of soccer on 14%, with rugby rounding out the top three on 13%.

Soccer had been the nation’s number one for eight years in succession from 2010, when the TSSI research was first carried out.

The 2012 Olympic champion has a special place in the nation’s hearts, with her epic win over Delfine Persoon voted both Ireland’s Greatest Sporting Achievement and Most Memorable Irish Sporting Moment of 2020.

The Dublin senior footballers' incredible achievement of winning Sam Maguire six years on the bounce sees them top the Team of the Year ballot, the first time they have done so on their history-making run. 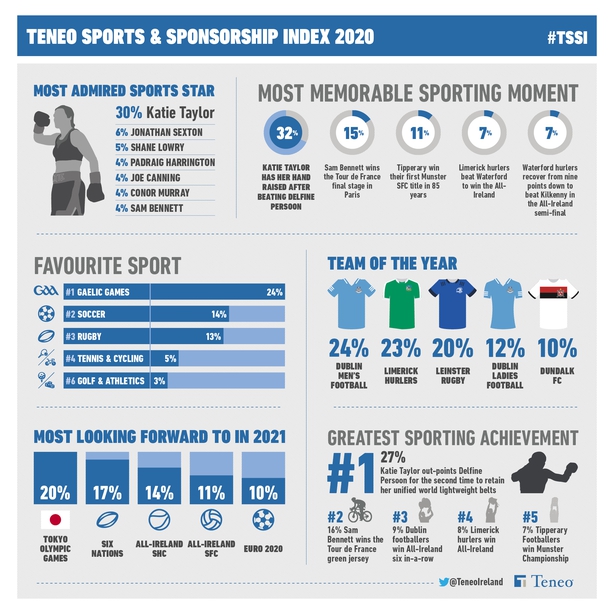 Following a disrupted year in 2020, the Irish sporting public is hoping for a packed sporting calendar in 2021, with the delayed Tokyo Olympic Games the event the nation is most looking forward to, with 20% of the votes.

Second in the running is the forthcoming and ever popular Six Nations, which gets underway next month and polled at 17%.

Rounding out the top five is Euro 2020, another major competition carried over from last year, on 10%, a significant drop from the 17% it got in the same category last year, before Ireland missed out on qualification.

The TSSI is a comprehensive 1,000-person nationally representative survey with quotas imposed across gender, region, age and social class.

The research was carried out by Teneo’s Sports and Sponsorship team and iReach and examines the Irish general public’s attitudes towards sport and their sporting heroes.

This is the view of the general public and not a survey of sports fans.  It is the eleventh year of the TSSI and the research was carried out between 14 January and 19 January.