Russia has been banned from major international sporting events for four years after being found guilty of manipulating laboratory doping data.

The World Anti-Doping Agency confirmed the punishment in Lausanne after considering recommendations from its independent compliance review committee (CRC).

The judgement means Russia will be banned from the 2020 Tokyo Olympics, the 2022 Beijing Winter Olympics and the 2022 Football World Cup in Qatar.

Individual Russian athletes untainted by the scandal will able to compete independently under a neutral flag.

WADA said the decision was unanimous, but Russia's Anti Doping Agency (RUSADA) has 21 days to appeal against the ban.

If it does so, the appeal will be referred to the Court of Arbitration for Sport (CAS).

"Russia was afforded every opportunity to get its house in order"

However, Russia will be able to compete at Euro 2020 next summer, which it has qualified for and is a tournament host with games due to be played at St Petersburg.

European football's governing body does not fall under the definition of a Major Events Organisation under the international compliance code.

The CRC made its recommendations based on evidence presented to it by WADA's intelligence and investigations (I&I) team.

The I&I team found there were inconsistencies in data handed over to WADA in January 2019 by Russia under the terms of its reinstatement to compliance in September 2018.

The data provided was inconsistent with a copy of the database supplied to WADA by a whistleblower in 2017, in that positive findings present in 2017 were missing from the 2019 data.

The I&I team found that some of the manipulation and deletion had occurred as recently as December 2018 and January 2019 - after reinstatement.

Russia has been banned from competing as a nation in athletics since 2015 when it was first declared non-compliant.

Russia's four-year ban was confirmed in a WADA statement. 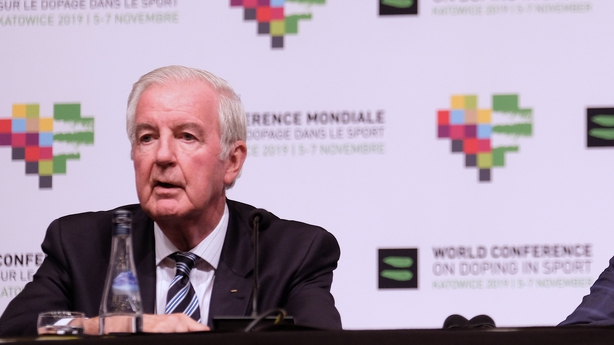 WADA president Craig Reedie (above) said: "The ExCo's strong decision today shows WADA's determination to act resolutely in the face of the Russian doping crisis, thanks to the agency's robust investigatory capability, the vision of the CRC, and WADA's recently acquired ability to recommend meaningful sanctions via the Compliance Standard which entered into effect in April 2018.

"Combined, these strengths have enabled the ExCo to make the right decisions at the right time.

"For too long, Russian doping has detracted from clean sport. The blatant breach by the Russian authorities of RUSADA's reinstatement conditions, approved by the ExCo in September 2018, demanded a robust response. That is exactly what has been delivered today."

Reedie added: "Russia was afforded every opportunity to get its house in order and rejoin the global anti-doping community for the good of its athletes and of the integrity of sport, but it chose instead to continue in its stance of deception and denial.

"As a result, the WADA ExCo has responded in the strongest possible terms, while protecting the rights of Russian athletes that can prove that they were not involved and did not benefit from these fraudulent acts.

"On behalf of the ExCo, and of the many WADA stakeholders that supported the CRC recommendation, I would like to thank the members of the CRC for their expert and considered recommendation, as well as WADA I&I and the forensic experts for their skill, diligence and perseverance in getting to the bottom of this highly complex case."

CRC chair Jonathan Taylor confirmed Russian athletes would be allowed to participate in competition by showing they were not involved in the doping programme.

He said: "While being tough on the authorities, this recommendation avoids punishing the innocent and instead stands up for the rights of clean athletes everywhere.

"If an athlete from Russia can prove that they were not involved in the institutionalised doping programme, that their data were not part of the manipulation, that they were subject to adequate testing prior to the event in question, and that they fulfil any other strict conditions to be determined, they will be allowed to compete."