Simone Biles defied a kidney stone and medical advice as she clambered off her hospital bed to stage a remarkable comeback at the World Gymnastics Championships in Doha on Saturday.

The 21-year-old superstar revealed she had spent most of the previous day "crawling on the floor" in pain as her much-vaunted return after an 18-month hiatus from the sport threatened to end in agony.

Determined not to let down her United States team-mates, and shrugging off advice from doctors to rest longer, Biles not only nailed her four qualification routines for a leading total of 60.965, but potentially earned a new entry into the sport's code of points in the process.

Biles, who first revealed her health problem in a Twitter tweet late on Saturday, said: "It's been a rough 24 hours.

"Yesterday I was kind of crawling on the floor and I was like, I can't move, but I think my pain tolerance is better than others because I'm an athlete.

"My mum took me to the team doctor and he said we had to go to get some tests because it was over my appendix, and I went on the table and the doctor said it was a kidney stone.

this kidney stone can wait.... 👊🏾   doing it for my team! ❤️ I’ll be gucci girls ! pic.twitter.com/rKkvuEQrKc

"She throws a blanket over me and I was like, 'what are you doing?' She said, 'you might stay here', and I said, 'I'm leaving - but thanks for telling me I've got a kidney stone."

Biles duly delivered with top-ranking qualification scores on three of her four apparatus and a second place on her less favoured uneven bars, although other challengers like Russia and China begin their qualification processes on Sunday.

If it was hard not to be enthralled by the power and precision of Biles' floor routine, which scored 15.333, it was all the more stunning to see her land her signature forward double-twisting vault for the first time in global competition.

It means Biles will get the vault named after her in the sport's code of points, subject to formal recognition by the the International Gymnastics Federation (FIG).

Doha marked Biles' second competition since her rest in the wake of her quadruple gold medal haul in Rio, having swept the board with five titles at the US National Championships last month.

During her hiatus from the sport, which Biles had insisted she needed in order to combat the prospect of burn-out, she had fulfilled an ambition to swim with sharks, and restricted her sporting endeavours to occasional bounds on a trampoline. 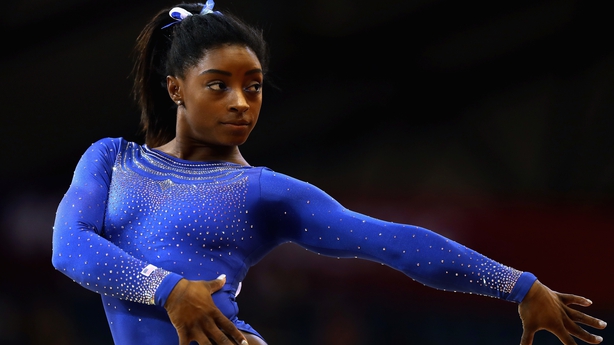 More importantly, Biles became a vocal advocate of those pressing for justice over the sex abuse scandal within the US federation. Biles revealed she had been one of the athletes abused by former team doctor Larry Nassar, who is now serving a life sentence.

Neither that appalling scandal, nor the knowledge that she has already established herself as an all-time great, could convince Biles that her immediate destiny lay anywhere other than within her sport.

She is already targeting Tokyo 2020 and there is the more immediate prospect - should she achieve medals in all six disciplines of Doha - of matching the record of 20 world medals held by Svetlana Khorkina of Russia.

"It's kind of crazy being back at the worlds already because I never thought it would have come around so quickly," added Biles.

"I'm excited about how it went but I never go into competition to think about the records. To be honest I don't know about them until somebody writes about them on social media."

Biles is set to return to action in the Aspire Dome in women's team final on Tuesday. Given kidney stones and

late night hospital visits are unable to stop her, her rivals will already be resigned to their respective fates.