Rhys McClenaghan has secured gold in the pommel horse at the European Championships at the the SSE Hydro in Glasgow.

The Newtonards native became the first Irish gymnast to win a European medal, finishing clear of the eight-man field following a score of 15.300 at the Scottish arena.

In fact, the 19-year-old had already made history by making the final, a feat never before achieved by an Irish gymnast.

And McClenaghan becomes Ireland's fourth medallist at these European Championships following the Gary and Paul O'Donovan silver in rowing, Thomas Barr's bronze in the 400m hurdles and Shane Ryan's bronze in the 50m backstroke.

Going up against the Olympic and World pommel horse champion, Team GB's Max Whitlock, McClenaghan began with real confidence and fluidity, swinging very smoothly throughout with long lines, before hitting a triple Russian at the end just before a near perfect dismount to finish.

McClenaghan was fourth to go in the final but celebrated knowingly following his dismount with a performance that looked pretty flawless throughout the 45-second routine.

The Commonwealth Games gold medallist qualified with a score of 15.200, but went one better in the final to score 15.300 with better execution en route to taking his place atop the podium. 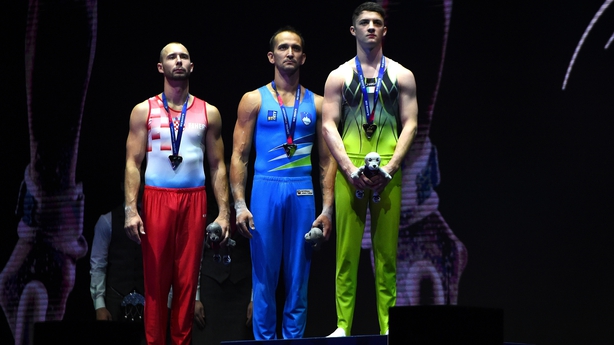 Whitlock actually made a serious mistake in his difficult routine and could only manage 14.000 from the judges, finishing off the podium.