The New England Patriots will play in their 10th Superbowl appearance after a brilliant 24-20 comeback victory against the Jacksonville Jaguars in the AFC Championship game at the Gillette Stadium.

They'll meet the Philadelphia Eagles, who cruised to the NFC title with a blowout 38-7 win over the Minnesota Vikings.

The Patriots were trailing by 10 points during the final quarter but 40-year-old quarterback Tom Brady stepped up to throw two touchdown passes to Danny Amendola to secure victory and reach his and head coach Bill Belichick's eighth Superbowl appearance since being drafted by the franchise in 2000.

It was a case of deja vu for the Jaguars whose only previous showing at this stage in the play-offs came in 1996 when they lost 20-6 at the Patriots - one year after their inception.

The Patriots opened the scoring with the first drive of the match which lasted five minutes and 39 seconds when Stephen Gostkowski kicked a 31-yard field goal to put the hosts ahead after the first quarter.

However, Jacksonville raced into a 14-3 lead midway through the second quarter when quarterback Blake Bortles found Marcedes Lewis for a four-yard pass before running back Leonard Fournette, fresh from his three-touchdown display last week, added another score for the visitors.

James White ran in from one yard for New England to reduce the gap to four points at half-time but Jacksonville continued to press and they increased their advantage with 54-yard and 43-yard Josh Lambo field goals - the first becoming the longest successful kick in the play-offs in the Jaguars' history.

Brady - who had a record of 7-0 against Jacksonville in his career before the match - inspired the Patriots to overturn their 10-point deficit as he picked out Amendola for a nine-yard touchdown before a stunning catch from the wide receiver regained the lead with 2:48 left on the clock to secure New England's place at Superbowl LII in Minnesota.

Standing in their way of a third Super Bowl crown in the space of four years is the Philadelphia Eagles, who routed the Minnesota Vikings to capture the NFC title. 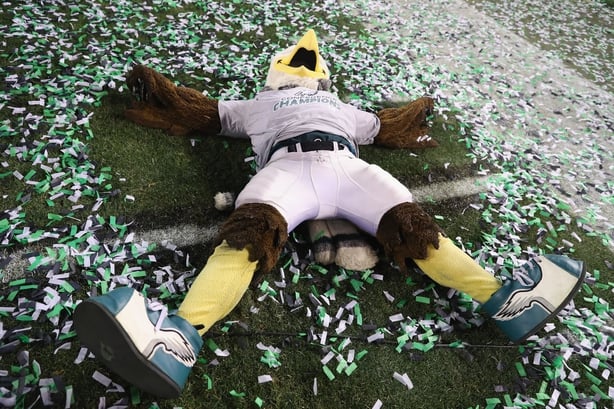 Nick Foles threw for 352 yards and three touchdowns in a standout display for the quarterback, who has shone in recent weeks following a knee injury to regular starter Carson Wentz.

His performance lifted the Eagles into their first Super Bowl since 2005, when they were edged out 24-21 by the Patriots.