Legendary RTÉ sports commentator Jimmy Magee has died aged 82 after a life spent bringing sporting events from around the world to listeners and viewers in Ireland.

In a career spanning 59 years he commentated on a huge variety of sports, including eleven World Cups and ten Olympic games.

Simple and powerful, Jimmy’s description of Maradona’s magic goal against England at the 1986 World Cup provided perhaps his most famous line.

Born in New York on 4 February, 1935, he was brought up on the Cooley Peninsula in County Louth. He wrote many letters to Radio Eireann before starting work with the station in Dublin’s GPO in 1956.

"When I was young, eight, nine ten, I used to do a programme called Sunday Sport out in the back garden," he explained.

"I did the sig(nature) tune, all the reports, the league tables, kept it going and my grandfather thought I was crazy. A neighbour used to say to my mother and father, ‘your Jimmy is going to end up being a footballer'.

"I figured early on that if I wasn’t going to be an active sportsman it would be better to be involved in commentary. For a very simple reason - footballers come and go. Commentators, they go on for ever and ever." 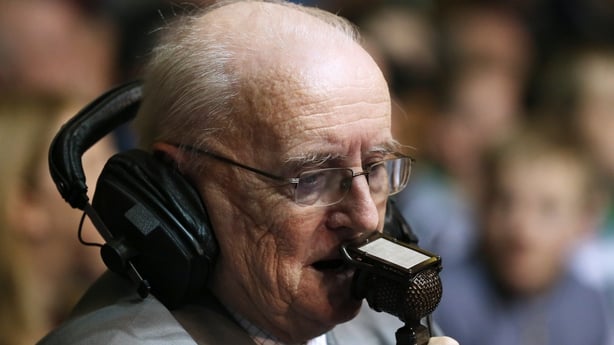 Through World Cup finals, his first for radio in 1966 to his last in 2010, and Olympic Games, from ’68 to ’12 when he commentated of Katie Taylor’s famous boxing gold medal winning fight, he was happiest behind the microphone.

In the mid-nineties he worked for UTV, fulfilling a lifelong ambition to commentate on an All-Ireland final.

The following year he was at the Atlanta Olympics and would later draw criticism for his continued support of swimmer Michele Smith following her for year ban in 1998 for tampering with a drugs sample.

He ventured out of the commentary box too, with his encyclopaedic knowledge off sport earning him the title of Memory Man. He co-hosted popular RTÉ Television quiz Know Your Sport alongside George Hamilton from 1987 to 1998.

There was the glamour of the Superstars programme and there was the Jimmy Magee All Stars, a coming together of Jimmy's show business and sports friends to raise money for charity.

For almost six decades, Jimmy Magee was there to call so many sporting moments. A broadcasting legend in a class of his own.

He was honoured by the International Olympic Committee for services to the Games in 2012, when he was presented with a specially commissioned replica of the Olympic torch.

He is survived by his three daughters, Linda, June and Patricia, and his son Mark. His son Paul, who played in the League of Ireland for Shamrock Rovers, died in 2008 having suffered with Motor Neurone disease and his wife Marie passed away in 1989.