Three NFL franchises will play in London for the first time next year as part of a four-game schedule that will see back-to-back contests staged at Wembley and successive matches hosted at Twickenham.

The Cleveland Browns, who are yet to win a game in 2016, will be the home team against the Minnesota Vikings at Twickenham, which will also be the venue for a Los Angeles Rams 'home' game again, this time against the Arizona Cardinals, who were one win away from last year's Super Bowl.

As well as the Browns and Cardinals, the Baltimore Ravens will make a maiden Transatlantic voyage to face the Jacksonville Jaguars at Wembley, where the New Orleans Saints meet the Miami Dolphins either seven days earlier or a week later.

Having four games in London, the equivalent of half of an NFL team's home schedule, is seen as another significant landmark on the road to a possible UK-based franchise further down the line.

Wembley has hosted fixtures since 2007 and at least two per year since 2013, while Twickenham was turned into an NFL venue for the first time in October as part of a three-year deal that will see at least three games staged there. 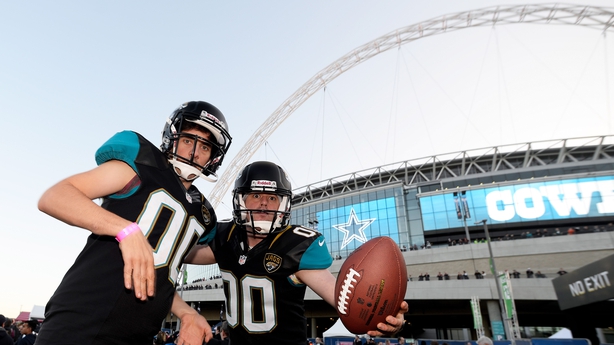 The 2017 games to be played at Wembley will take place on September 24 and October 1, while the Twickenham fixtures will be played on October 22 and 29.

With Cleveland, Baltimore and Arizona all due in London, 26 of the 32 teams will have played at least one game in England since the International Series was first introduced in 2007.

The only clubs who will not have played in the capital by the end of next year are the Philadelphia Eagles, Tennessee Titans, Green Bay Packers, Seattle Seahawks, Carolina Panthers and Houston Texans.

The NFL has been encouraged by the constant sell-outs in London, though a further litmus test of the American football fandom over here will be provided by the interest in Cleveland's game with Minnesota.

The Browns are currently 0-13 and will join the 2008 Detroit Lions as the only non-expansion team to endure a full winless NFL season since World War Two should they fail to win any of their final three fixtures.

And though they retain a strong core of supporters in Cleveland, tickets for their final home game of the season in Ohio on Christmas Eve can be purchased for as little as $6.

The fact eight teams will travel means the NFL has also held off testing the interest in having a side play more than one of their 16 regular-season games in London.

The Jacksonville Jaguars, over in 2017 for the fifth straight year, seem the most likely candidates to be the guinea pigs in the future given they have a deal to play at Wembley until 2020.