Seattle had a 10-point lead at one stage and were on the one-yard line in the final 20 seconds but Russell Wilson threw a dramatic interception to Malcolm Butler to kibosh their hopes of becoming the first franchise in a decade to win back-to-back Super Bowls.

Brady was largely faultless but his only faux pas of the first half saw him hurl an interception to Jeremy Lane in the red zone after interior pressure from Michael Bennett forced an uncharacteristic mistake from the veteran quarterback.

Lane's pick came at a cost, though, as he injured his arm attempting to run the ball back and the Patriots took full advantage of his absence on their very next drive.

Tharold Simon replaced Lane and was immediately picked on by Brady, who connected with Brandon LaFell for the game's opening score in the second quarter.

Seattle suffered early offensive struggles and it took nearly 20 minutes of the game before Wilson made his first completion to Jermaine Kearse.

His very next passing attempt was a 44-yard bomb to Chris Matthews, the wide receiver's first ever NFL catch, and that teed up Marshawn Lynch's bulldozing touchdown run which restored parity. 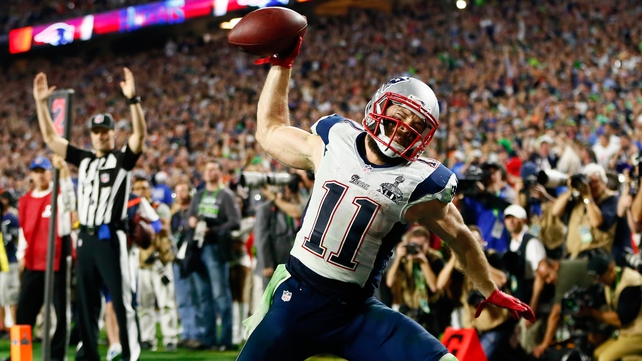 However, a game which had started so slowly exploded into life in the final two minutes of the first period.

First, Brady marched his side down the field and found tight end Rob Gronkowski down the sideline to edge the Patriots ahead again.

That left Seattle with just 31 seconds but Wilson drove them 80 yards in that time and, following a crucial 15-yard penalty against Kyle Arrington, he went to Matthews again near the goal-line on a gutsy play call from head coach Pete Carroll which meant his side entered half-time on level terms.

The defending champions received the ball to start the second half and Matthews again reeled in another big play, this time for 45 yards, and a short Steven Hauschka field goal meant Seattle led for the first time.

Momentum was firmly in their corner now and the Seahawks' much-vaunted defence finally started getting pressure to Brady as he coughed the ball up again on the Patriots' next possession.

The Seahawks turned that Bobby Wagner interception into six points when Wilson found Doug Baldwin off play-action which meant the NFC champions were up 24-14.

That was the way it stayed until midway through the fourth quarter when Brady threw his landmark third touchdown of the evening.

After missing a wide-open Julian Edelman on the previous play, the New England signal caller hooked up with Danny Amendola for a four-yard score which took Brady past Montana.

Seattle were unable to reply and Brady then engineered a masterful series, going eight for eight and producing the goods in the red zone on a passing play to Edelman which was a carbon copy of the one he had earlier missed.

Wilson entered the two-minute warning in New England territory and a sensational circus catch from Kearse, which saw him juggle the ball four times before bringing it under his control, brought them to the one-yard line.

However, the Seahawks' questionable call to throw rather than run from there backfired as Butler stepped in front of a Wilson pass to seal a fourth ring for Brady and his franchise.