It was a full house for RTÉ Sport in 2014 as all 20 top-rating sports programmes - on any television channel in Ireland - were broadcast on RTÉ One and RTÉ2 with huge audiences tuning in to the Six Nations, the 2014 FIFA World Cup and the GAA Championships.

The most-watched sports programme of the year on any TV channel was RTÉ2’s live coverage of Ireland’s Six Nations victory over France in Paris with 891,000 tuning in to see Joe Schmidt’s side clinch the 2014 title.

In second place was the 2014 FIFA World Cup Final between eventual winners in extra time Germany and Argentina. RTÉ2’s live coverage of the final from Rio De Janeiro was watched by 859,000 people.

The All Ireland Football Final between Kerry and Donegal, on RTÉ2’s Sunday Game Live, was the third most-watched sports programme of 2014 with 831,000 viewers tuning in to see Kerry seal a 37th All Ireland crown.

In fourth place was the drawn All Ireland Hurling Final between Kilkenny and Tipperary, again on The Sunday Game Live but this time on RTÉ One. 796,000 viewers watched as the old rivals went toe-to-toe with nothing to separate them at the end.

Ireland’s narrow defeat to England at Twickenham in the Six Nations came in at number 5 with 717,000 viewers.

Ryle Nugent, Group Head of Sport, RTÉ said: "2014 was another great year for sports coverage with major events such as the Six Nations, the 2014 FIFA World Cup and GAA Championships in particular delivering great entertainment to huge audiences on RTÉ One and RTÉ2.

"With more choice than ever before available to Irish TV audiences in this highly competitive market we are particularly delighted that all of the top 20-rated sports programme of the year were on RTÉ and that viewers chose RTÉ Sport as their home of live sport in 2014." 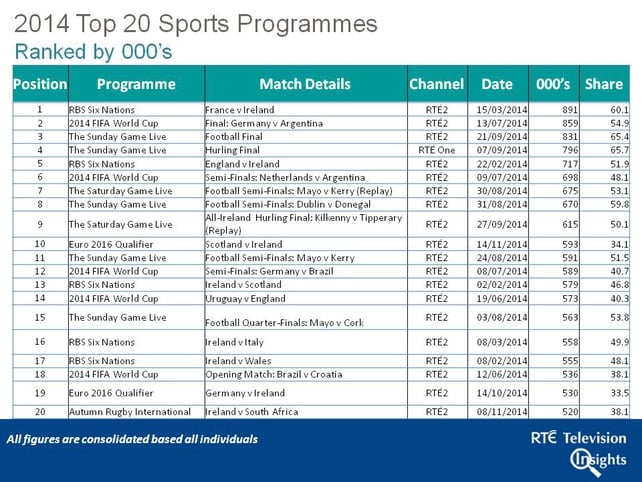