Cathal Pendred has said he plans to "steamroll" his next UFC opponent Gasan Umalatov in Stockholm on Saturday.

Speaking to RTÉ Sport, Pendred said he wants to finish the fight in the first round to make a statement.

“I got a lot of praise for my last victory [against Mike King in Dublin last July], because everything was stacked against me after that first round,” Pendred said. “I was in some serious bad situations. And I got a lot of credit for coming back and winning in that way.

“But this time around I don’t want the fight to be even close. I want to steamroll this guy and go straight through him and be impressive in that sense.”

"I know if push comes to shove, and I’m in a bad situation, I can take lot more than most guys and not give in" - Cathal Pendred

Pendred has had to cut his weight to 170lbs for the contest, but he insisted he was more comfortable at this weight than at middleweight.

“I’m really excited about coming back down to welterweight,” Pendred said. “It’s where I really made a name for myself and where I feel most comfortable.

"Having spent a while in the weight class above, I’m just excited and confident going back down to meet the welterweights.

“I’m excited to put on a performance; I want to announce myself in this division and put on a really impressive win.”

Pendred said his experience of middleweight, and in particular the manner of his win against King – Pendred took serious punishment before recovering for a stunning victory - would stand to him as he came back down a weight division.

“Mike King was as big a middleweight as you can get, and I took everything he had from him in that first, and then I came back, obviously and took the victory," said Pendred.

“I don’t plan on fighting like that ever again, but I know if push comes to shove, and I’m in a bad situation, I can take lot more than most guys and not give in.”

He said he thought the King fight would be on Umalatov’s mind and suggested it would unnerve him.

“I think there’s something very scary about knowing that there’s not much that can stop a person,” he said.

“When you’re in there in a combat situation, and you just can’t figure what to do to get rid of someone or put them away it’s a scary and daunting thing as a fighter.”

Pendred also said he has been working on his striking with Owen Roddy, who he called “one of the first Irish MMA greats”.

Roddy has “made my striking suit my style, and just worked on that, and it’s just made me feel a lot more loose, a lot more confident.” 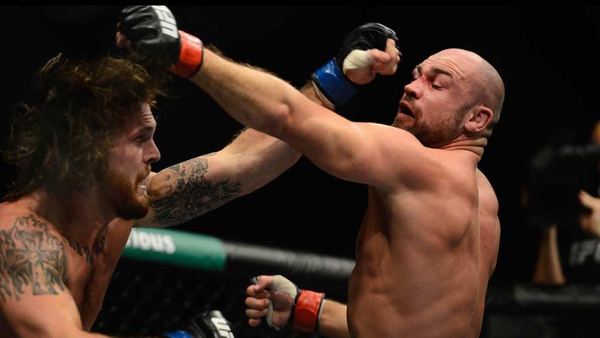