It’s a sunny Tuesday morning when I pull up outside the Straight Blast Gym in west Dublin and make my way to the reception where I drink black coffee and wait for a star of Irish mixed martial arts – Cathal Pendred.

Pendred enters the gym chilled and relaxed, wearing a pair of blue jeans and a grey t-shirt, with his gym bag slung over his back, before offering to show me around the facilities before we talk about his career thus far.

The Dubliner has been quietly been going about his business over the last few years, building a reputation for himself as a fighter with a big future in the sport, with victory in the welterweight division of Cage Warriors, Europe's biggest MMA competition, already on his list of accomplishments.

He’s currently involved with The Ultimate Fighter 19, a reality series in which two of the contestants will be awarded a contract in the Ultimate Fighting Championship. The UFC is the holy grail for MMA, and is the competition in which Pendred's training partner Conor McGregor competes.

The show airs on BT Sport every Wednesday and Pendred spent seven weeks out in Las Vegas filming it last year, but is contractually obliged not to reveal anything about the final outcome until the show has finished airing in late June/early July. However, he does tell me that taking part was the toughest challenge he has faced yet. 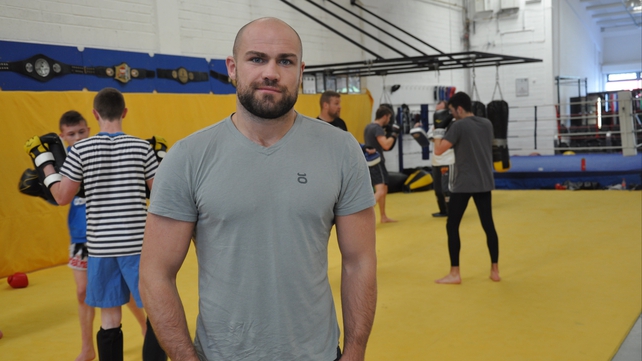 “It’s the toughest thing that I’ve ever done, I was living over in Las Vegas for seven weeks with no contact with home, living in a house with a bunch of guys I was competing against.

“Generally when I’m fighting I try not to talk to them or see them until the weigh-ins, so that was definitely difficult.

“The hardest part of the experience is having no distractions. Normally I train and then go home and switch off by watching TV or reading a book.

“You didn’t have any of that in the house, for TV purposes the Fox producers wanted that because they wanted people to crack up a little bit as you’re interacting with people you’re competing with all the time.

“The only thing that kept me going was my hopes and dreams. I started this sport because I wanted to fight in the UFC and that’s what drove me to do it.” 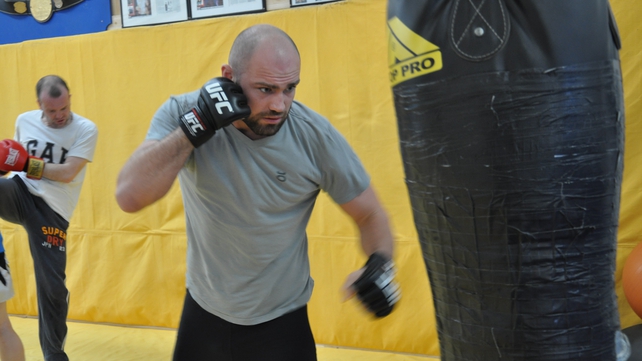 But getting to the UFC is only the start for Pendred, being the best in the world is his dream.

“The ultimate goal is be the champion of the UFC, I want to be the best fighter in my weight class. I’ve got my foot in the door with the Ultimate Fighter and the UFC guys know who I am,” he says.

“Once you get your foot in the door, you go on a four, five, six-fight winning streak and then you’ll get a title shot. That could take between a year and half and two years.

“UFC is the Champions League or the World Cup of MMA, and that’s where everyone wants to be. I want to get in there and be the best and climb my way right up to the top.”

While many top Irish athletes have to leave these shores to pursue top-tier training, Pendred says that's not part of his plan.

“When I was younger I used to go over every summer to train and there are some great gyms over there, but that was the only difference, the facilities. And obviously the numbers of people competing was higher.

“But Ireland has quickly caught up with that and the coaching I found wasn’t as good as what I found here. John Kavanagh, my coach, is hands down the best coach I’ve ever trained with and I’m very fortunate to have him.

“And why would I want to leave and be away from my support network, my friends and family.

“But one of the biggest perks is that the sport is global and I can be away for a few months to California or Florida where you can get some sunshine or go to Thailand to work on my Thai boxing for a month or two. I’m hoping to do that next December and January.

“I go to Iceland quite a bit. There’s a UFC fighter over there called Gunnar Nelson who’s in my weight class, so when he’s got a fight coming up I go over and train with him.

“It’s great to get over there, it’s like a retreat, and I love it over there. I’m heading over to train there for the month of June.” 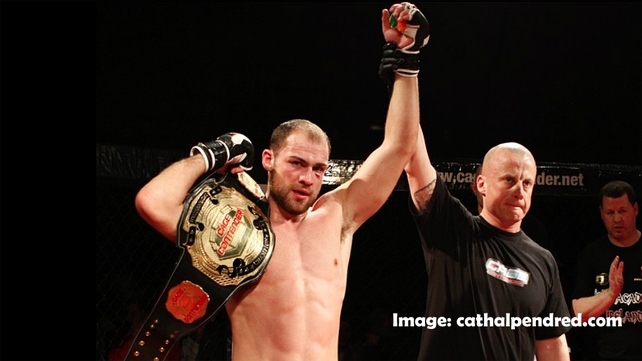 Pendred says that as a child he was competitive, but that this facet of his personality was honed by playing rugby at school: “What I loved about rugby was the physicality of it. I wasn’t that interested in getting the ball or making a run. I was interested in making a tackle or hitting the rucks.

“I also loved one-on-one competition. I always tried to pick one guy off the other team and try to outplay him. That one-on-one challenge appealed to me. I then started watching MMA on TV, but didn’t have time to try it with all my rugby training.”

The bearded, 6’2”, northsider went on to tell me that getting into the sport was something of a happy accident and a case of turning a bad thing into a good thing.

“After school I went to DIT to study business and ended up not liking it and dropping out and reapplying on the CAO. So I had a year to spare and my friend and I went to San Diego and lived there for nine months,” he says.

“I started training there in an MMA gym and was immediately hooked. It had everything I liked about rugby but was more concentrated and was one-on-one.

“If I’d been in Ireland I would have been studying and playing rugby so thank God I dropped out. I feel very fortunate for that.”

On his Twitter page, Pendred writes his bio as “Attaining inner peace through fighting” and says that MMA has given him a niche that satisfies him deeply.

“I feel fortunate to have found something that I love to do,” he says.

"I have inner peace through fighting. I do a little bit of meditation ...  sometimes you need to step back from it” - Cathal Pendred

“I think knowing that is a big part of inner peace for people. I have inner peace through fighting. I do a little bit of meditation and chilling out clearing the mind and listening to music. MMA can sometimes be an intense thing and sometimes you need to step back from it.”

In terms of strategy and training pre-fight, due to the diversity of the sport, build-ups to fights can vary greatly.

Pendred states: “The sport is so strategic and there are so many different disciplines that when you’re coming up to a fight, depending on the different disciplines you have, you can concentrate on fighting on a particular area of the sport. The striking, the boxing, kickboxing, or you can try and wrestle your opponent or you could try and submit your opponent. So that changes the way you train.

“On Monday mornings I would work on grappling and stretch treatment. Then I would grapple again in the evening. Tuesdays I’m in at one o’clock to spar. That’s the most draining session of the week.

“Depending on how tired you are after that you might do some grappling or kickboxing. It goes on like that every day.

“In the morning on Wednesdays we focus on one part of training, maybe wrestling, and another area in the afternoon, maybe boxing.

“Thursday is another sparring day with more positional stuff. Friday we do our own training. Saturday is also like that, not team based, but you pick an area yourself you would like to work on.

“At the weekends I like to do outdoor stuff: go hiking or swim and walk on the beach. I’m quite a mellow guy. I wasn’t when I was younger. But now all my energy is focused on my training.”

Pendred is on the paleolithic diet to keep fat down and make sure he maximises his weight with as much muscle as possible.

He says: “One of the different things about MMA to a field sport is that you are trying to make the weigh in. 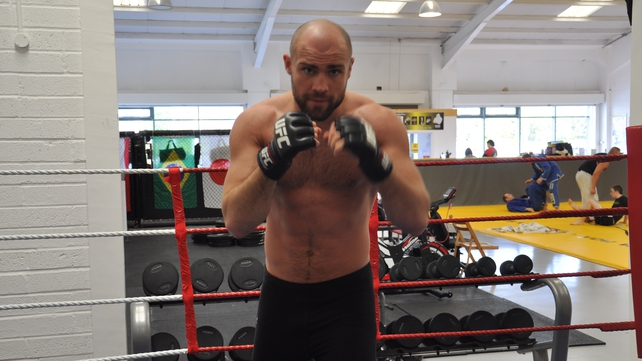 “It’s a big advantage to be as lean as possible, so you want as little fat as possible.

“Our strength and conditioning coach has us all on the paleolithic diet, which is the diet of the cavemen: meats, nuts, vegetables and a little bit of fruit.

“Not potatoes, no pasta, no bread, no processed foods. Very little dairy. It’s a simple diet which is why some people struggle with it.”

The 26-year-old also highlights sports psychology and training the mind as a crucial element of his regime.

“I think sports psychology is massive and I don’t think a lot of athletes give it as much time or credit as they should,” he says.

“You see guys that nearly got to the top but didn’t get to the top because of the mental factor. I work with a sports psychologist, Dave Mullins from Conquer Mental Skills Training, and speak to him at least every two, three weeks. Fight sports are more mental than others, you’re in there on your own and you have to be switched on from the start.

“I don’t even contemplate losing when I’m training for a fight. I’ll visualise the fight and in these visualisation techniques I am always the winner. 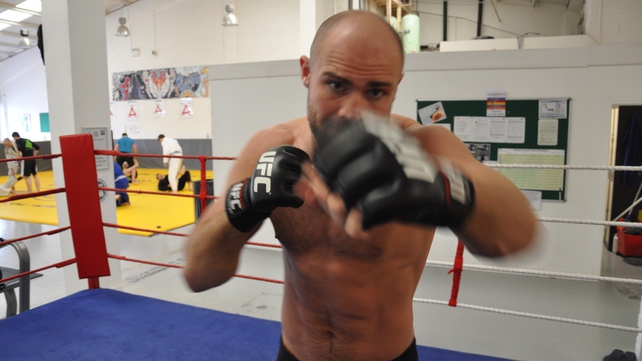 “You also want to be calm and relaxed and control your adrenalin with a clear mind. It’s like chess. You want to analyse everything your opponent does and you can’t do that when you’re seeing red. So, visualisation helps with that.

“You can always be stronger and always improve and that’s what I’m trying to do with sports psychology.”

Asked what advice he would pass on to aspiring MMA fighters, he says he believes following the route that he and McGregor have taken would be a good start, and that today’s hopefuls are at an advantage as they have a clear path to follow:

“I started MMA at 19 and I didn’t have a strong foundation in martial arts,” he says. 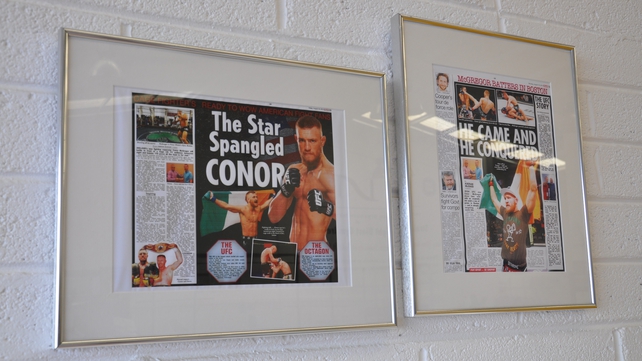 “When I told people I wanted to get to the UFC, people said I was crazy. There was no financial support from the Irish Sports Council because nobody here had done it before.

“Before the four-minute mile was done it was seen as impossible. Then one person did it and within months seven or eight other people did it. Once you see something is possible you can do it.

“I looked at other people from other countries and saw how they did it.

“I trained hard and revolved my whole life around it and got to where I am.

“Now the younger guys have a path to follow, and it’s just down to hard work, sacrifice and dedication. And believe. If you don’t believe you can do something, at the end of the day you won’t do it.”