There was barely a snowflake between the two after 2,713 metres down the gleaming Rosa Khutor slope, with the timing system showing both had clocked one minute, 41.57 seconds.

Switzerland's Lara Gut took the bronze medal after coming across the line just a tenth of a second slower on a course designed by compatriot and 1972 men's winner Bernhard Russi.

"I came close to the gold medal at Vancouver so I was aiming for one here." - Maze

"I made everything to achieve that great race today, but it's crazy," said Gisin, lost in amazement.

"Maybe all the problems and setbacks I had to face in my career have contributed to make me skiing so fast today. I attacked hard from top to bottom," added the 28-year-old, who has had her share of injuries over the years.

Alpine skiers have shared medals before at the Olympics, but never for gold. 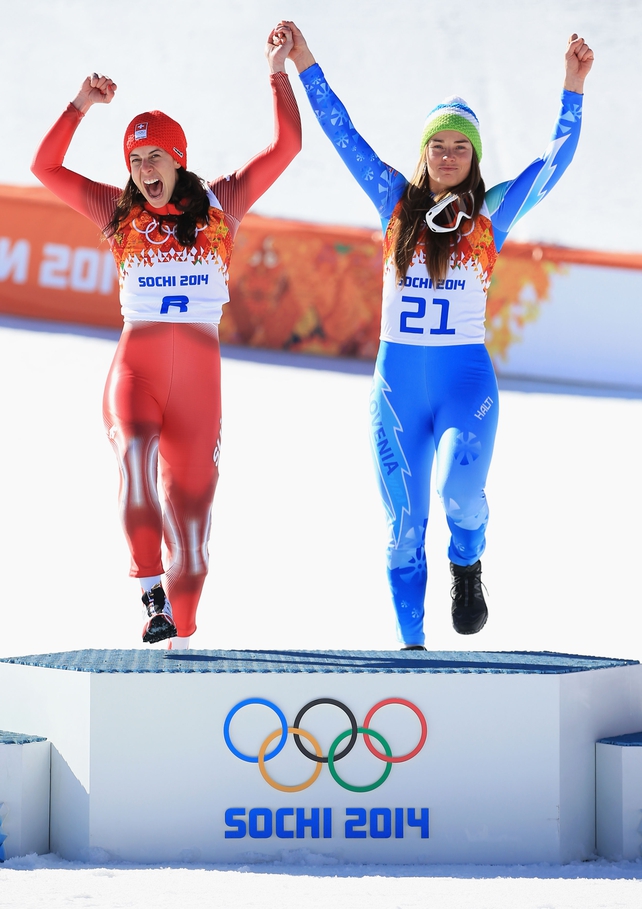 At the Innsbruck Games in 1964, France's Christine Goitschel and American Jean Saubert shared giant slalom silver, while in 1992 American Dian Roffe and Austrian Anita Wachter tied for second place in the same discipline.

On the men's side, Switzerland's Didier Cuche and Austrian Hans Knauss tied for Super-G silver in 1998.

Of the winners, Maze - redeeming a relatively poor season by becoming the first Slovenian to win Olympic gold - was the one who let outright success slip from her grasp in the final metres of the glistening Rosa Khutor slope.

Although she and Gisin were united on the podium, last year's runaway overall World Cup winner was ahead of the Swiss on the split times until the finish.

"I am really glad I was able to make it happen today... I came close to the gold medal at Vancouver so I was aiming for one here," said the 2010 super-G silver medallist.

"It's great to share the title with Dominique, who is a great skier and pretty similar to me with her character and attitude. She is a fighter too."

Gisin, who started eighth and then had to watch nervously as all of the favourites came down after her without matching her time, was the first Swiss downhill winner since Michela Figini in Sarajevo 30 years ago.

Maze started 21st and Switzerland could also take some credit for her gold, with the Slovenian skier trained by Mauro Pini, the former Swiss women's coach.

There was disappointment for Germany's Maria Hoefl-Riesch, the favourite who was bidding to equal Croatian Janica Kostelic's women's record of four Olympic gold medals but finished only 13th.

"It was not my day. I made many mistakes and not a good enough line so it was not enough, she said.