The Houston Texans may have seen their pre-season Super Bowl hopes disappear in a calamitous 38-13 home loss to the St Louis Rams.

Insult was added to injury when Houston quarterback Matt Schaub left the game with an ankle problem and his replacement TJ Yates saw an interception returned 98 yards for a touchdown by Alec Ogletree, making it 38-6.

It was a fourth straight loss for the Texans.

The much-hyped clash between quarterbacks Joe Flacco and Aaron Rodgers threatened to be settled by field goals until things picked up in the second half, Rodgers' Green Bay Packers ultimately hanging on to top the Baltimore Ravens 19-17.

Rodgers had one 64-yard touchdown pass to Jordy Nelson to put on the highlight reel but Green Bay's success was built on four Mason Crosby field goals. 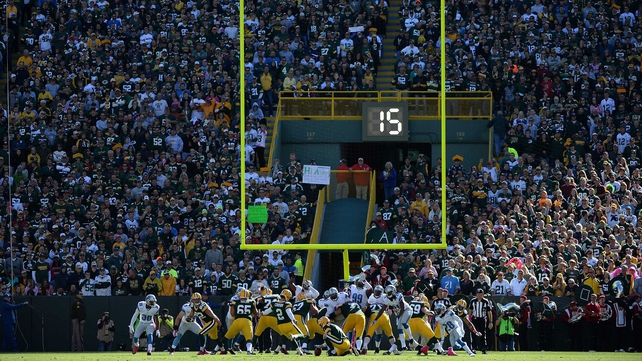 They saw a 16-3 lead disappear as Baltimore rallied to close within two points on Dallas Clark's score with 2:04 remaining, but Rodgers found Jermichael Finley with a 52-yard pass on a final drive that ran down the clock.

The Pittsburgh Steelers registered their first win of the season at the fifth attempt as they beat the New York Jets 19-6.

The win, which ends Pittsburgh's worst start to a campaign since 1968, was the 600th in franchise history.

The Kansas City Chiefs kept up their unbeaten start to the season with a 24-7 victory over the Oakland Raiders.

They leaned heavily on their defence as Oakland quarterback Terrelle Pryor threw three second-half interceptions and was sacked 10 times.

Cam Newton threw for three touchdown passes and scored another on his feet as the Carolina Panthers beat the Minnesota Vikings 35-10. 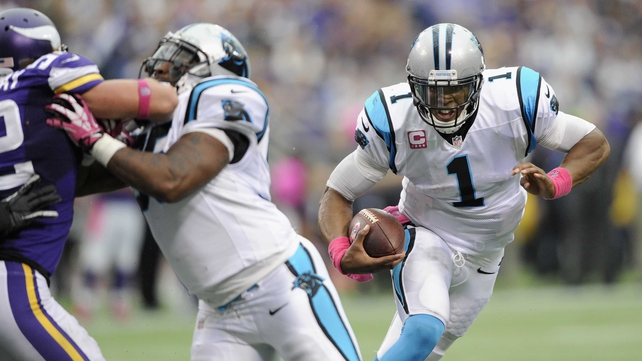 The Vikings trailed almost throughout and although Adrian Peterson registered 62 yards on 10 carries and 21 yards on three receptions, he was hardly used in the second half.

The reigning league MVP learned on Friday of the death of his two-year-old son in an alleged case of abuse.

Nick Foles had three touchdown passes and a fourth on the ground as the Philadelphia Eagles kept the Tampa Bay Buccaneers winless with a 31-20 victory.

The Detroit Lions recovered from a 17-7 half-time deficit to beat the Cleveland Browns 31-17 as Matthew Stafford threw for four touchdowns.

Tight end Joseph Fauria caught three of them, including the game-clincher with 2:01 remaining. 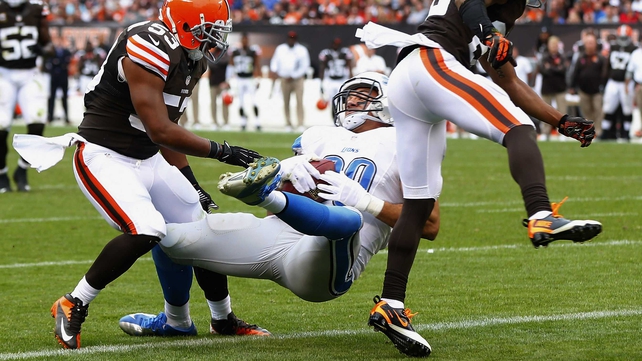 Andy Dalton threw for 337 yards and three touchdowns with one interception as Cincinnati got their first road win of the season. 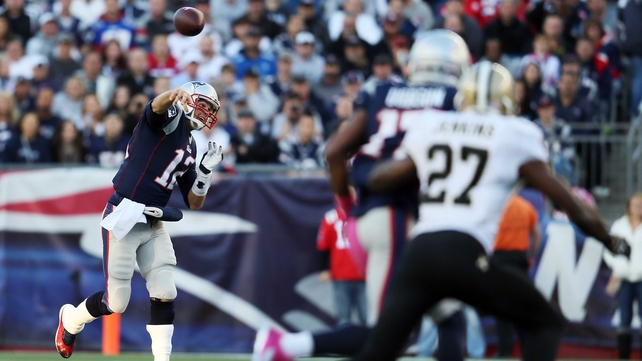 The Saints had taken a 24-23 lead less than four minutes earlier when Drew Brees threw a 34-yard pass for Kenny Stills, who held off two New England defenders for his first career touchdown, and they stretched it with a field goal.

But the Patriots produced a stunning 70-yard drive after receiving the ball with 68 seconds to go and no timeouts, capped by rookie Thompkins' TD.

The Patriots improved to 5-1 with the victory, while the Saints dropped to the same mark.

Peyton Manning threw for two touchdowns as the Denver Broncos stayed perfect with a 35-19 win over the gritty Jacksonville Jaguars.

Manning was not at his best but Knowshon Moreno ran for three TDs to help the Broncos win a game which proved closer than had been expected. 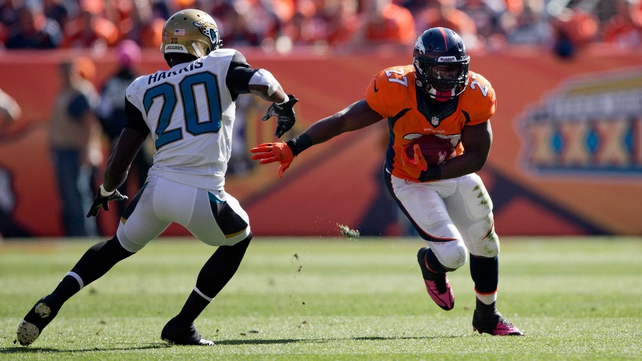 Marshawn Lynch ran for two touchdowns as the Seattle Seahawks won their fifth of the season, beating the Tennessee Titans 20-13.

Russell Wilson threw for 257 yards as the Seahawks stayed on top of the NFC West.

Colin Kaepernick threw two touchdown passes for Vernon Davis to lift the San Francisco 49ers to a 32-20 win over the Arizona Cardinals, while the Dallas Cowboys were 31-16 winners over the Washington Redskins.