Lewis Hamilton is set to extend his Formula One career beyond his 40th birthday after he revealed he will thrash out a new deal with Mercedes in the coming months.

Hamilton's £40million-a-year contract with Mercedes expires at the end of next season.

But the seven-time world champion, who turns 38 in January, wants to continue his record-breaking journey in the sport, with a multiple-year extension set to carry him into his forties.

Speaking ahead of Sunday's Mexican Grand Prix, Hamilton said: "We are going to do another deal. We are going to sit down and discuss it in these next couple of months."

Later, he added: "I am not putting a limit on it, but am planning to do a multi-year contract."

Hamilton joined Mercedes in 2013 after bursting on to the Formula One scene with McLaren in 2007.

The Stevenage-born driver, who has the most victories and pole positions in F1 history - and shares the record of seven world championships with Michael Schumacher - has been supported by the Silver Arrows since his childhood.

Hamilton has endured a turbulent campaign in his uncompetitive Mercedes machinery this season, while there were question marks over whether he would even return to F1 following his contentious championship defeat against Max Verstappen in Abu Dhabi last year.

However, Hamilton continued: "I want to keep racing. I love what I do. I've been doing it for 30 years, and I don't feel that I should have to stop. I think I am currently still earning my keep. I still want to do better.

"I could stop now and I have lots of other things in the pipeline that I will be super-focused and super-busy with. I'm here for the sheer love of working in the organisation that I'm in. So you are stuck with me for quite a bit longer. 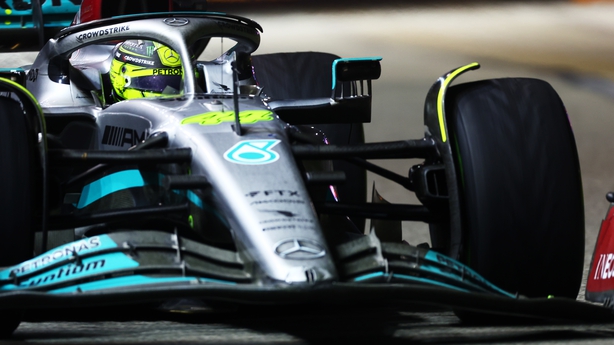 Hamilton was denied his first victory of the season when Verstappen passed him for the lead with just six laps remaining at Austin's Circuit of the Americas last weekend.

The result leaves Hamilton in danger of losing his remarkable record of winning at least one race in each year he has competed.

Speaking ahead of the 20th round of 22, Wolff said: "Lewis drove an outstanding race to finish second. We need to keep this momentum going.

"Race day in Austin was quite a roller coaster of emotions. While we didn't quite have the pace to win, it was great to be in the mix at the front and leading the race.

"The upgrades we brought to Texas delivered a step forward and we were closer to the front than we have been recently.

"We're cautiously optimistic heading to Mexico but the W13 can be unpredictable from track to track, so we'll have to wait and see."