Lewis Hamilton admits there were times during his superb win at the inaugural Saudi Arabian Grand Prix when he feared he would be put out of the race by his "f****** crazy" title rival Max Verstappen.

The seven-time world champion took victory at the Jeddah Corniche Circuit, which delivered one of the most incredible grands prix of all time, to draw level on points with Verstappen in the drivers' championship heading into next weekend's final round in Abu Dhabi.

The duelling pair being tied on 369.5 points - the first time that two drivers have been level on points ahead of the last race of a season in 47 years - was as a direct result of a scarcely believable turn of events.

Having stormed to pole position on Saturday, Hamilton came out on top following a wild race which saw him tangle with the Red Bull of Verstappen as the pair wrestled on the track and bickered off it.

A remarkable coming-together on lap 37 saw both drivers hauled in front of the stewards as Hamilton hit Verstappen, with the latter claiming he was attempting to let his rival pass following an earlier overtake.

In doing so, Verstappen slowed down significantly and Hamilton ran into the back of the Red Bull: "This guy is f*****g crazy, man," came his radio call.

Asked afterwards about the slur and whether he felt Verstappen drove dangerously enough to worry Hamilton that he could be put out of the race and lose the chance to fight for the title in Abu Dhabi, he replied: "I definitely feel that there were scenarios where that was the case.

"This isn't the first time I have had to avoid collisions and that is how I felt in the moment, sometimes you say things in the heat of the moment and go back and re-watch things and maybe feel differently.

"In the moment that is how it felt but I just try to recompose myself, chase him down and keep fighting.

"It was clear that others around us were willing to take it to all sorts of levels to overtake so I just tried to keep it on the track and stay out of trouble - avoid incidents if I could and I was really, really grateful that I had a wing by the end.

"I know I can't overtake someone off track and keep the position - that is well known between all us drivers, but that does apply to one of us I guess."

Earlier, Hamilton had scampered away into the lead with Valtteri Bottas his rear-gunner after retaining second place.

The start of an enthralling sequence of events would begin as Mick Schumacher stuck his Haas into the barriers at turn 22.

A safety car was deployed as Hamilton and Bottas dived into the pits, the latter angering Verstappen as he slowed on track to avoid waiting behind his team-mate at the garage.

It would soon be Hamilton turning the airwaves blue as he fumed at the decision to red flag the race, essentially handing Verstappen a free pit stop.

An 18-minute delay for the barrier to be fixed then led to a standing start with a second red flag thrown following a collision in the midfield.

There was still time for drama at the front of the field, Hamilton passing Verstappen who then cut turn one to keep the lead as Esteban Ocon also stormed past Hamilton and into second.

During the break in racing as the latest accident was cleared away, the FIA and Red Bull were then left bartering over a penalty for Verstappen. It was agreed he would drop behind Hamilton for the second restart, with Ocon on pole for Alpine.

A fine dart down the inside at the second restart saw Verstappen take the lead but Hamilton soon made light work of Ocon and was on the tail of his title rival.

As Hamilton closed in, a number of virtual safety cars for debris on the track halted his quest to take the lead.
But when the track was clear he was again squeezed out by Verstappen, who was told to give the place back by his Red Bull garage.

This would lead to the flashpoint of the race, the upshot of a collision seeing both have to answer to the race stewards.

Despite wing damage, Hamilton would pass just as Verstappen was hit with a five-second time penalty for gaining an advantage in their earlier spat.

From then on, Hamilton powered to the chequered flag, Verstappen coming home in second place, claiming afterwards on the radio that: "This (sport) is more about penalties than racing," and later adding: "In general lately it is the trend in F1, that is not how I grew up watching Formula One. We just have to deal with it.

"Emotions were running high at the time and it is what it is. I don't agree with the decisions but I don't want to waste too much time on it because we don't need to make headlines out of it - they (Mercedes) don't deserve that." 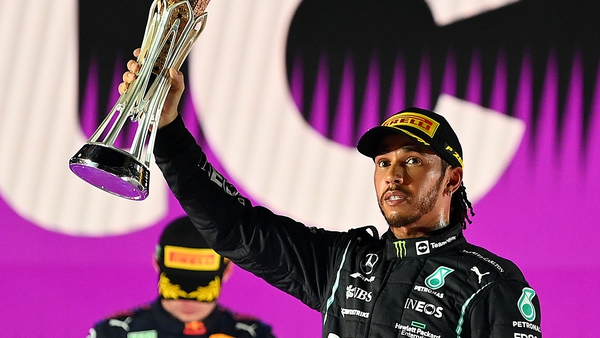