Lewis Hamilton's Mercedes team could call on Formula One's stewards to reconsider their decision not to penalise Max Verstappen at the Brazilian Grand Prix.

Hamilton won the Interlagos race following a superb comeback drive, but Verstappen escaped punishment for running his rival off the road as they duelled for first position.

The stewards noted the incident before looking at the footage and choosing not to launch a formal investigation - a decision Mercedes team principal Toto Wolff described as "laughable".

FIA race director Michael Masi later revealed that the on-board video from Verstappen's car was not available when the stewards acted.

And the PA news agency understands that Mercedes have not ruled out exercising their right to review the flashpoint.

The FIA's International Sporting Code allows a right to review on the grounds that "a significant and relevant new element is discovered which was unavailable to the parties seeking the review at the time of the decision concerned."

A retrospective five-second time penalty for Verstappen would see him drop behind Hamilton's Mercedes team-mate Valtteri Bottas to third in Sunday's result - reducing his championship advantage over Hamilton from 14 to 11 points. A grid penalty could also be an option to the stewards if the incident is reviewed.

On top of Verstappen not being penalised, Mercedes were furious that Hamilton was disqualified from qualifying when the rear wing on his Mercedes car failed a scrutineering test by 0.2 millimetres, and the British driver's £4,200 fine for undoing his seatbelts as he celebrated his once-in-a-lifetime comeback triumph.

Speaking after the race, Wolff said: "That was a really strong defence from Max, and absolutely an inch over the limit, and Lewis managed brilliantly to avoid the contact.

"But that was over the line and it should have been at least a five-second penalty but brushing it under the carpet is the tip of the iceberg. It is just laughable.

"When you are taking punches all weekend and then you have such a situation like that, you are just losing faith in a way.

"We have had many punches in the face this weekend and I am just angry about that. I am usually diplomatic but diplomacy has ended."

Red Bull exercised their right to review Hamilton's 10-second punishment following his collision with Verstappen at the British Grand Prix in July, but their case was thrown out by the stewards.

Hamilton and Verstappen will renew their rivalry at the Qatar Grand Prix on Sunday with three rounds left and 78 points available in F1's most exciting championship battle in recent memory. 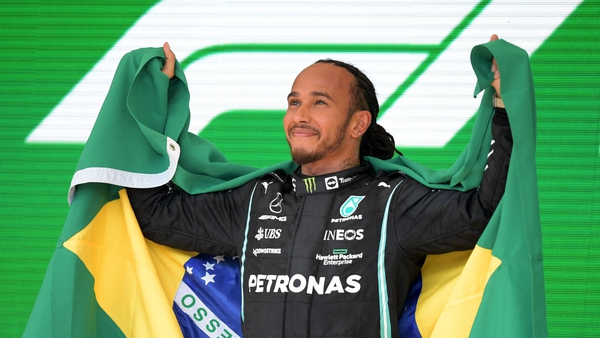