Lewis Hamilton is facing the prospect of being thrown to the back of the grid for Saturday's sprint race at the Brazilian Grand Prix while title rival Max Verstappen could also be in trouble for an alleged breach of protocol.

Two hours and 15 minutes after qualifying fastest at Interlagos, Hamilton’s Mercedes team were summoned to see the stewards following an alleged infringement on the rear wing of their driver’s car.

It was claimed by Formula One’s technical delegate, Jo Bauer, that Hamilton’s Drag Reduction System on the back of his Mercedes was operating at a bigger gap than is permitted, allowing him to produce a greater top speed.

Stewards confirmed the rear wing assembly of Hamilton’s car would be removed and impounded overnight.

The saga then took another turn 30 minutes later when the stewards announced that they had summoned Verstappen and a Red Bull representative to appear before them at 9.30am local time on Saturday for an "alleged breach of Article 2.5.1 of the FIA International Sporting Code".

That article states that "in the parc ferme, only the officials assigned may enter. No operation, checking, tuning or repair is allowed unless authorised by the same officials or by the applicable regulations."

It means both title contenders could face penalties. Hamilton is currently 19 points behind Verstappen with just four rounds left.

If Hamilton’s car is adjudged to be illegal, the seven-time world champion could be excluded from qualifying – resulting in a pit-lane start for Saturday’s 24-lap dash at Interlagos – and a catastrophic dent in his bid to secure a record-breaking eighth title.

The winner of the sprint race is awarded three points, the runner-up two and third place one point. The result also determines the grid for the Grand Prix on Sunday.

Hamilton will already be demoted five places for Sunday’s grand prix after Mercedes changed his engine for a fifth time this season.

Only three engine changes are permitted under the rules.

Earlier, Hamilton had appeared to resurrect his fading hopes of beating Verstappen to the title after qualifying 0.438 seconds clear of his Red Bull rival.

Hamilton has been jeered by Verstappen's travelling army at a number of venues this year but here in Sao Paulo, Brazil’s largest city, the British driver is the fans’ overwhelming favourite – his pole lap greeted with a deafening cheer.

His popularity was endorsed, too, by his choice of helmet design – a one-off nod to his childhood hero, the Brazilian triple world champion Ayrton Senna, who is revered in this part of the world.

"Firstly I am so happy to be back here in Brazil," said Hamilton before news of the investigation emerged.

"One of the marshals that works here said I should use the Senna flag and colours more often because that is my first pole in a long time. It is crazy because it has been such a long time, it feels like my first.

"It has been so hard coming from the last race in Mexico, the team have worked flat-out and the man hours they have put in are insane.

"But today, was a really good qualifying session and I am super-happy with it.

"We have got the penalty on Sunday but I will give it everything I have got. It is not easy to follow here. It is going to be hard to catch Max but I will do my best to come through the field."

Verstappen, speaking before news of his investigation had been announced, added: "When they take on a new engine, naturally they have more power for the weekend so for me it is not a big shock, and I am just happy to be second."

George Russell was beaten by a Williams team-mate over one lap for the first time in his 56-race career with the British team.

Russell, who will join Hamilton at Mercedes next year, lines up in 18th, a place behind Nicholas Latifi in the sister car. 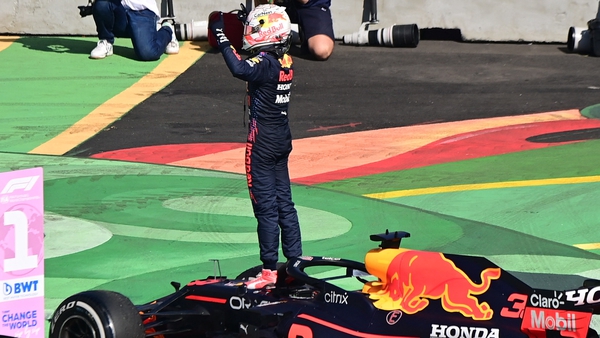