Max Verstappen was proclaimed as the winner of the shortest race in the sport’s 71-year history.

George Russell took second, with Hamilton third after the 12th round at a rain-soaked Spa-Francorchamps circuit was finally abandoned following three hours and 44 embarrassing minutes.

Hamilton’s championship advantage over Verstappen has been reduced from eight to three points.

Seventy-five thousand fans stood in the persistent rain and wind for a race due to start at 3pm, pushed back to 3:10pm, 3:15pm and then 3:25pm.

The safety car took the field away on a formation lap, but after eight minutes the red flags were deployed.

Following a delay of two hours and 47 minutes, the FIA’s race director Michael Masi gave the green light for the race to resume.

Some of the sodden spectators pumped their fists in delight, with Verstappen’s fans lighting orange flares on the Kemmel Straight.

But their celebrations were premature. After just two laps of the 4.35-mile circuit, the race was red-flagged, and 19 minutes later at 6:44pm local time, the torrid affair was called off. 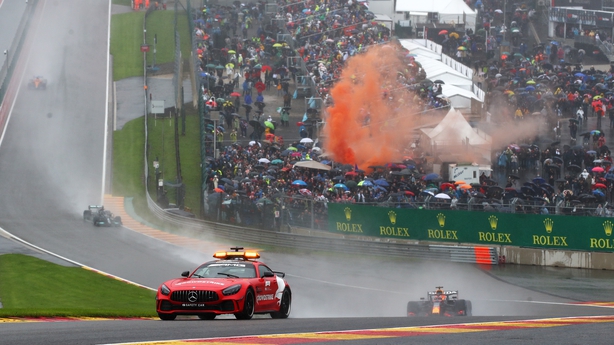 Hamilton raised suggestions of a cynical manoeuvre by the sport’s bosses, calling the afternoon a "farce". Completing two laps ensured an official result, that half-points would be awarded, and the spectators, whose tickets ranged from €125 to €590, might not be refunded.

It was alleged F1 would then also receive their €17.5m hosting fee from the race organisers – an accusation rebuffed by chief executive Stefano Domenicali.

"The sport made a bad choice today. Money talks, and the two laps was literally a money scenario," said Hamilton.

"Between the two hours when they stopped the race and started it again, there was no change in the weather.

"But I know why they did it. There is a rule that says for it to be a legal race there has to be a minimum of two laps. They knew that and they sent us out for two laps behind a safety car.

"That activates a bunch of things and I don't know the politics in the background.

"But my concern is that the fans should get their money back. I don’t know if us doing those two laps means they don’t. We should have better values in the sport."

Hamilton last year said "cash is king" when condemning F1’s decision to go ahead with the Australian Grand Prix amid the outbreak of Covid-19. The event was cancelled at the 11th hour after a McLaren mechanic contracted the virus.

On Sunday night, Hamilton added: "There are similarities today with us being in Melbourne last year when we shouldn’t have been.

"Today was a farce and the only people to lose out are the fans who have paid good money to watch us race.

"Of course you can’t do anything about the weather but we have sophisticated equipment to tell us what is going on and it was clear the weather wasn’t going to let up.

"We were sent out for one reason and one reason only. Two laps behind a safety car where there is no possibility to gain or lose a place to provide entertainment to fans is not racing.

"We should have just called it quits, not risked the drivers, and most importantly refunded the fans who are the heart of the sport."

Did the two laps have a commercial bearing, Domenicali was asked? "No," he said. "It is totally not true because when it comes to racing that is the FIA and their processes. These things are not connected at all.

"For the people here it is a shame because everyone wants to see proper racing. But the decision taken was absolutely correct.

Quizzed on whether the fans will receive a refund, Domenicali added: "It is something we will look at together with the organisers. We are not the ones putting the tickets out.

"We can look at a gesture of intention to see what is the right reward in this condition. The organisers together with us will consider the maximum attention to the fans."

The abandoned race came just 24 hours after British driver Lando Norris was fortunate to emerge unscathed from a terrifying 300km crash at Eau Rouge in qualifying.

The Spa-Francorchamps venue is considered to be one of the most dangerous tracks on the F1 calendar, with 23 drivers perishing here. Two years ago, French Formula Two driver Anthoine Hubert lost his life after a multi-car collision.

Damon Hill, the 1996 world champion, tweeted: "Brave decision by Michael Masi. If the race had gone ahead and there had been a serious accident, we’d be asking why he started the race. Tough. But ultimately a mature thing to do. Spa has claimed a lot of drivers."