Ireland's Craig Breen and his co-driver Paul Nagle held off the challenge of the Toyota Yaris of Welsh driver Elfin Evans to take fourth place on Arctic Rally Finland, the second round of the World Rally Championship (WRC).

Having dropped from second on day one to fourth at the end of the second day, Breen's Hyundai i20 held a ten-second lead from fifth placed Evans, which was cut to 3.6 seconds on the penultimate stage of the day, the first run over Aittajarvi.

However, the second run over the same stage saw Breen hold off Evans with his best run of the weekend, second on the stage, to claim a very creditable fourth place behind the overall winner, and his Hyundai team mate, Ott Tanak, who dominated the ten-stage event from the off.

We have finished the #ArcticRallyFinland with 2nd on the power stage. I have to say a massive thanks to the team and my engineers. It was really hard mentally for me this weekend, after delivering so much in Estonia, but to come away with 4th overall, we have to be happy. ?? #WRC pic.twitter.com/Mk0gO92u8h

Tanak had 17.4 seconds to spare from the Yaris of Finland's Kelle Rovenpera, with Belgian Thierry Neuville taking the final place on the podium for Hyundai just 2.3 seconds behind the Finn.

Rovenpera now takes the lead in the WRC standings after two rounds and is four points ahead of Neuville with world champion Sebastian Ogier (Toyota) winner in Monte Carlo, relegated to third after a poor run in Finland.

Desite finishing fourth on his first outing of the year, Breen was not happy with his own performance saying, "the mechanics did an amazing job this morning changing the gear box and I'm afraid I didn't deliver for them".

Finland is due to be one of six events that Breen will compete for Hyundai this season as he shares third car duties with the Spaniard Dani Sordo who ran in the car in the first round in Monte Carlo.

The next round of the WRC is Croatia in April and Sordo is likely to get the nod to resume his Hyundai duties on the third round of the 2021 championship. 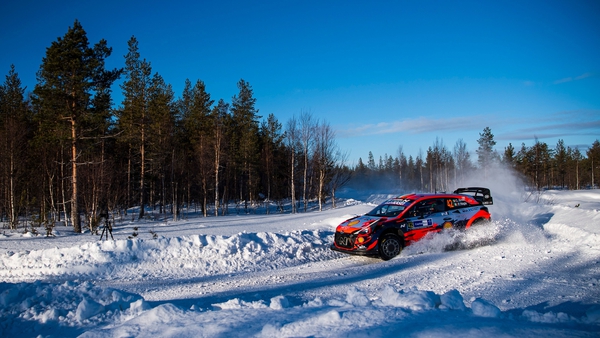