Breen and Paul Nagle, the 2019 ITRC winners, compete in the newly-created Arctic Rally Finland, with the opening two stages of the second round of the series taking place on Friday evening.

Breen wasn't part of the three-car Hyundai team in the opening event in Monte Carlo as Spaniard Dani Sordo ran in the i20 alongside Belgian Thierry Neuville and Estonian Ott Tanak.

Now he gets his opportunity to run once again with the Korean manufacturers after a brilliant second-placed finish with the team in last September's Estonian Rally.

However, while the WRC and many national rally championships continue in 2021, back at home the ITRC has been cancelled after rounds in Galway, the Circuit of Ireland and the West Cork bit the dust this year.

"From a medical point of view, I understand all the reasons behind it," said Breen

"All I know is that other national championships around Europe are still going on ahead and they've found a way to run within the tolerances of the Covid protocols and from what I've seen, the majority of the events have been able to run very smoothly.

"It's just a pity for everyone involved and not only the competitors, all the stakeholders involved all the businesses the preparation companies and suppliers.

"I would never be in a position to say what's right or wrong and I would never go against the advice of what the health people are saying, who know far more than I ever do, but all I do know is that other places across Europe have managed to find a way to run within all the protocols.

"It's just a pity to see it like that, but I guess I understand." 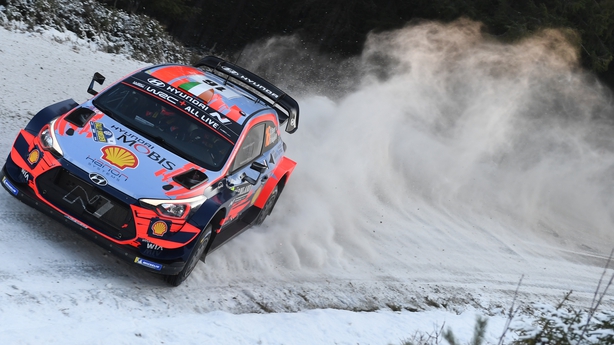 With the current worldwide situation surrounding the global pandemic remaining fluid, Breen says he is not looking beyond this weekend's round in Finland and to the other five WRC rounds in which he is due to compete.

"It's not really written in stone at the moment, my contract is quite flexible. Basically, I'll share the car with Dani (Sordo) and the team ultimately will decide which in which order.

The Arctic Rally Finland is a snow event and replaces the cancelled Rally Sweden. It is a very compact rally of five stages run twice over the three days.

Defending WRC champion Sebastian Ogier is the top seed in the Toyota Yaris, with Breen handed a favourable road position early on as he is running at the back of the World Rally car rankings.

"Obviously in the last couple of years, Rally Sweden has been a bit of a struggle," said Breen. "The climate has been sort of against the rally (with no snow) and there's been some milder weather than we wanted.

"But thankfully in Finland this weekend it looks like we will get the snow we need, and it's a surface where I've got my three podiums so far, so it's definitely a surface that seems to seems to suit us."

Breen and Nagle may find themselves behind the eight ball however at this weekend's event as they haven't tested the car to the same extent as those around him.

Indeed the Irish pairing haven't sat in the car since last October.

Nevertheless, Breen isn't offering any excuses ahead of an event that will have no spectators and will be policed by drones.

"Obviously we hadn't been in the car since October time and I haven't done anything on gravel or snow or anything like that since the last stage of Estonia last September.

"To jump back in in the car and try and get it all done in one day is difficult, especially when you know the other guys are doing a lot more testing, and practice rallies.

"It's tricky but these are the cards that we are dealt with and we just have to try and make the most of it and try to be as quick as we can.

"Last year everything was stopped for a couple of months. Between Christmas and the new year and the opening round in Monte Carlo was a short time but I don’t want to be making excuses even before the start of the event.

"You know I still feel confident and obviously it'll be all systems goes once we roll off the start ramp."

Ireland knocked out of T20 World Cup by Namibia