Max Verstappen sprung the surprise of the season by beating Lewis Hamilton to win the 70th Anniversary Grand Prix.

The Red Bull driver struck the sweetspot at Silverstone to cross the line 11.3 seconds clear of Hamilton with Valtteri Bottas third.

Mercedes had been expected to cruise to their fifth win from as many rounds this season.

But both Hamilton and Bottas struggled with their tyres to clear the way for Verstappen to take an unlikely win.

Indeed, the Dutchman had been a signifcant outsider to take the chequered flag ahead of Sunday's race.

"I didn't see it coming but after the first stint it seemed we were really good on tyres," said Verstappen after his ninth career win.

"We had a lot of pace in the car. I didn't have any tyre issues and we kept pushing.

"It was an incredible result to win, so everything worked out well and I am very happy." 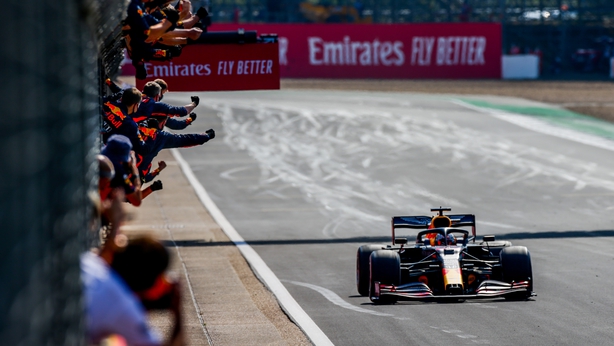 Hamilton said: "It was a massive challenge.

"Congrats to the Red Bull team and to Max. They didn't have the problems we had today.

"It was definitely unexpected to have the blistering as hardcode as we experienced - I was nervous the tyre was going to explode - but I am grateful I managed to progress and get through the race."

As Verstappen cruised to the flag, Nico Hulkenberg finished seventh for Racing Point, while Sebastian Vettel was outside the points in 12th following an opening-lap spin.